Photos and more from a great weekend!

Alumni Weekend returned with a Clan Day twist. The Weekend was built around a series of activities ranging from soccer to cookouts to Clan games and did not disappoint! Here’s a quick look back at the weekend, with photos at the end.

Everything “kicked off” with The Heights varsity soccer team defeating Bishop O’Connell 1-0 in front of a massive Friday afternoon crowd. After the victory, alumni headed up to the Courtyard for a cookout, lawn games, and the first taste of our Heights beer! This year we had one beer for each Clan of the Crest, sponsored by a family from that Clan: Red Cross Ale (The Meléndez brothers), Gold Cross Ale (The Hadleys), Red Rose Ale (The Syski Brothers), and White Lily Ale (The Sellier Brothers).  We also had a Double IPA featuring the main building of The Heights sponsored by Charlie Gilak ’14, Phil Brach ’19, Boots Lackey ’19, and Peyton Peterson ’19. All the custom labels were designed by George Martin ’10 and the beer was brewed by Beltway Brewing.

New for Friday evening was a short story discussion led by Mike Ortiz and Tom Royals, which was thoroughly enjoyed by all in attendance. These two legendary Heights teachers discussed Thank you for the Light by F. Scott Fitzgerald and A Clean, Well-Lighted Place by Ernest Hemingway. We look forward to continuing to promote the life of the mind at Alumni Weekend in the future.

Saturday morning got an earlier start with an 8 am alumni soccer game on the upper field. The day continued with coffee and breakfast in the Courtyard where new Alumni Clan Shirts were distributed for clan competitions. Pat Kilner ’97 (Kilner & Kirk Real Estate Advisors) and Grant DiGioia ’05 (Patriot Shredding) generously sponsored these shirts. A variety of competitions were held include pull-ups, thud, murderball, and tug of war.

The pull-up competition was led by Pat Kilner ’97 (White Lily, 25 pull-ups), Lucas Lopes ’10 (Gold Cross, 20 pull-ups), and Conor Hardy ’08 (Red Rose, 17). For Thud, players were divided into Crosses (Red & Gold) and Flowers (Red Rose & White Lily) with Gold Cross and White Lily having the most players. Flowers claimed the first victory and Crosses the second. Of particular note was the last stand of John Searby ’04 who battled with at least eight opponents singlehandedly and nearly defeated them all. A series of murderball (dodgeball) games were also played which included many children of alumni playing with their dads. Finally, a group of kids had a tug-of-war and as the smaller group was being defeated, alumni started joining in to help them, leading to an epic finish with tons of alumni intervening on both sides!

The games were followed by a cookout. It was awesome to see so many alumni bring their families for the Saturday morning events. The Courtyard was full of kids cheering on their dads!

Saturday’s events continued in the evening with the Mass for Deceased Alumni. Fr. Bob Kilner ’06 celebrated the Vigil Mass, which remembers in a special way the twenty-one deceased alumni of The Heights. Following Mass, the Alumni Dinner was held in Chesterton Hall, which was a formal opportunity for alumni to hear all the latest about The Heights from both the Director of Alumni Relations and Headmaster Alvaro de Vicente ’83. It was also a great opportunity for alumni to bring their wives, fiancées, or girlfriends to see the school.

Alvaro’s State of The Heights Address was particularly insightful as to where the school stands today, upcoming projects, goals, etc. After dinner, the traditional cigars were distributed and enjoyed on the patio outside Chesterton Hall into the late hours of the evening.

Alumni Weekend wrapped up with the Golf Classic at Kenwood Golf & Country Club on Columbus Day chaired by Denis Mitchell ’92. Among the over 100 players were a record 35 alumni! The winning foursome was led by Heights junior Jack Hermes ’23  and Stephen Patterson (brother of Lowell ’06 and James ’08). Ryan Lundregan ’08 won Closest to the Pin.  Among the many generous sponsors was Fore Fathers Dad Apparel, recently founded by Jake Sellier ’03 and Nick Scrivens. Jake and Nick joined many of the alumni present in a post-round photo. The Golf Classic will be held next Columbus Day, October 10th. Sign up early because it does fill up!

We hope to see you next year- October 7th-10th, 2022! Clan games will be back! Classes celebrating anniversaries next Alumni Weekend will be: 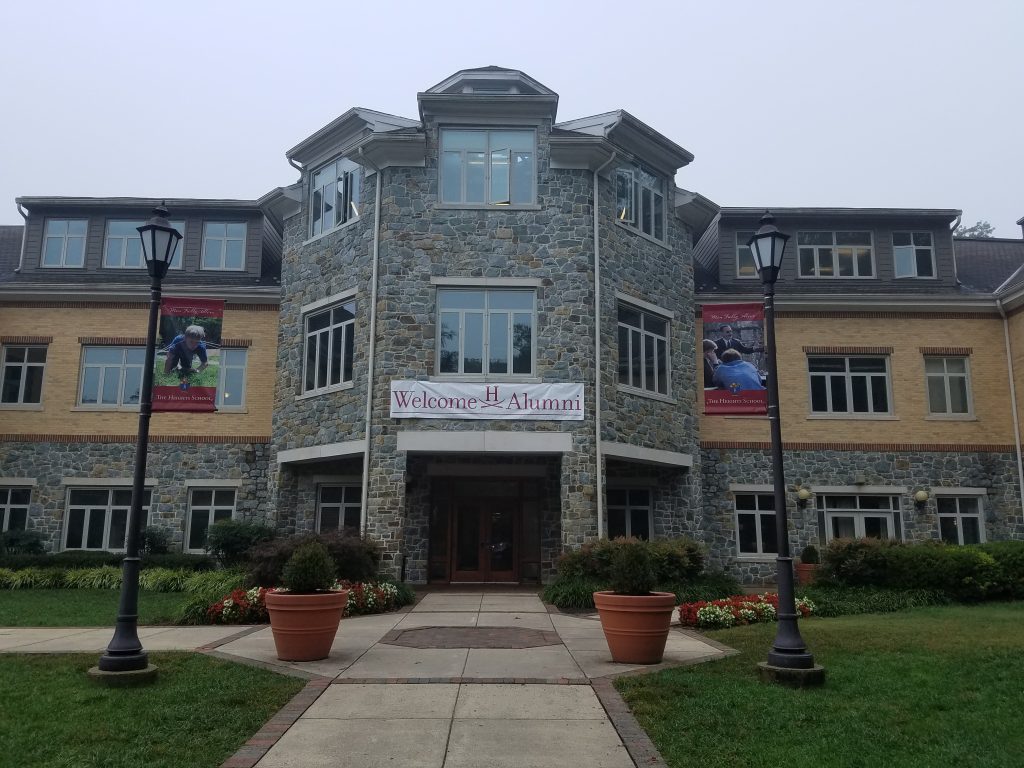 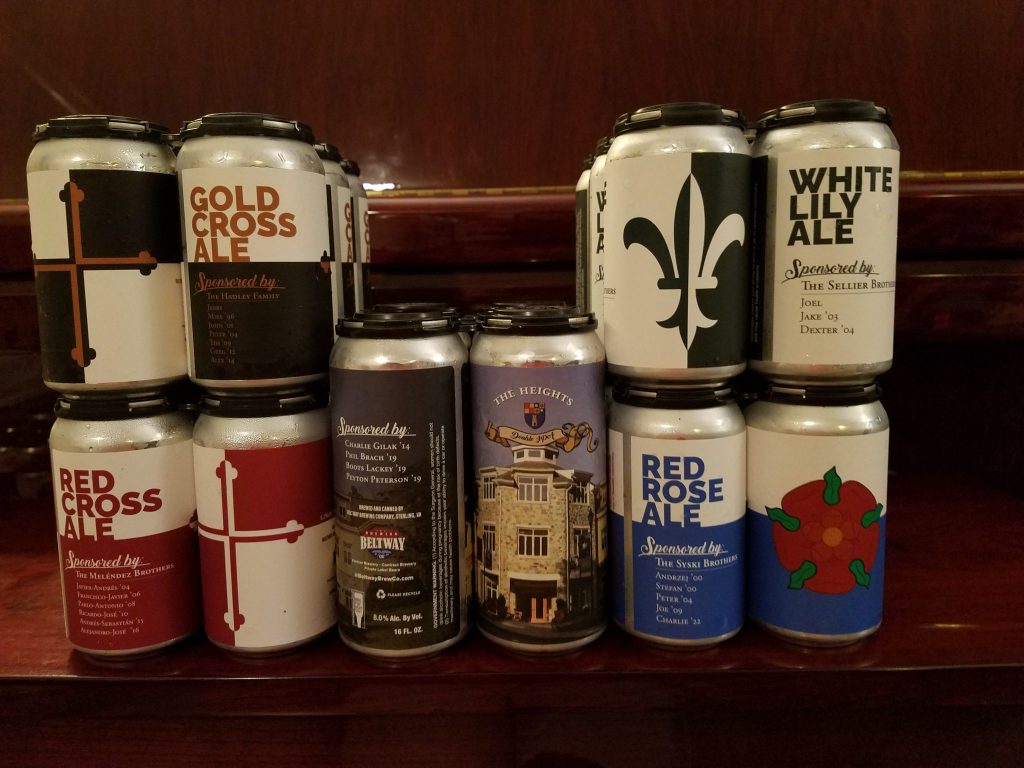 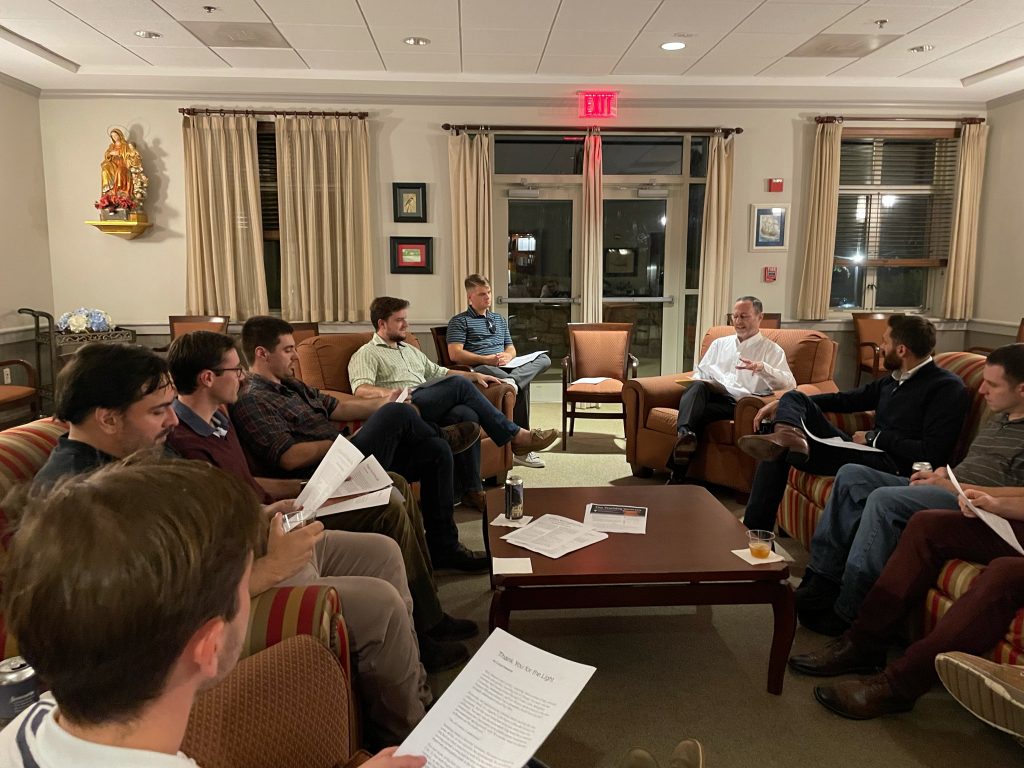 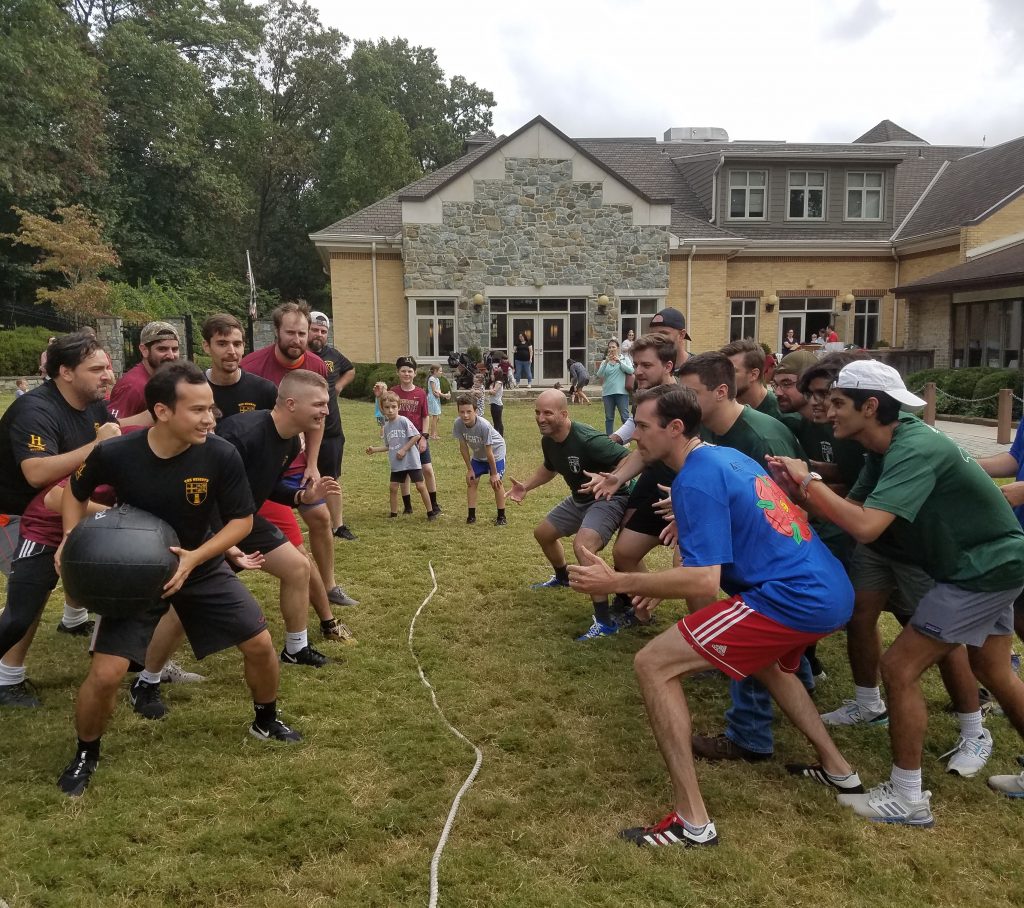 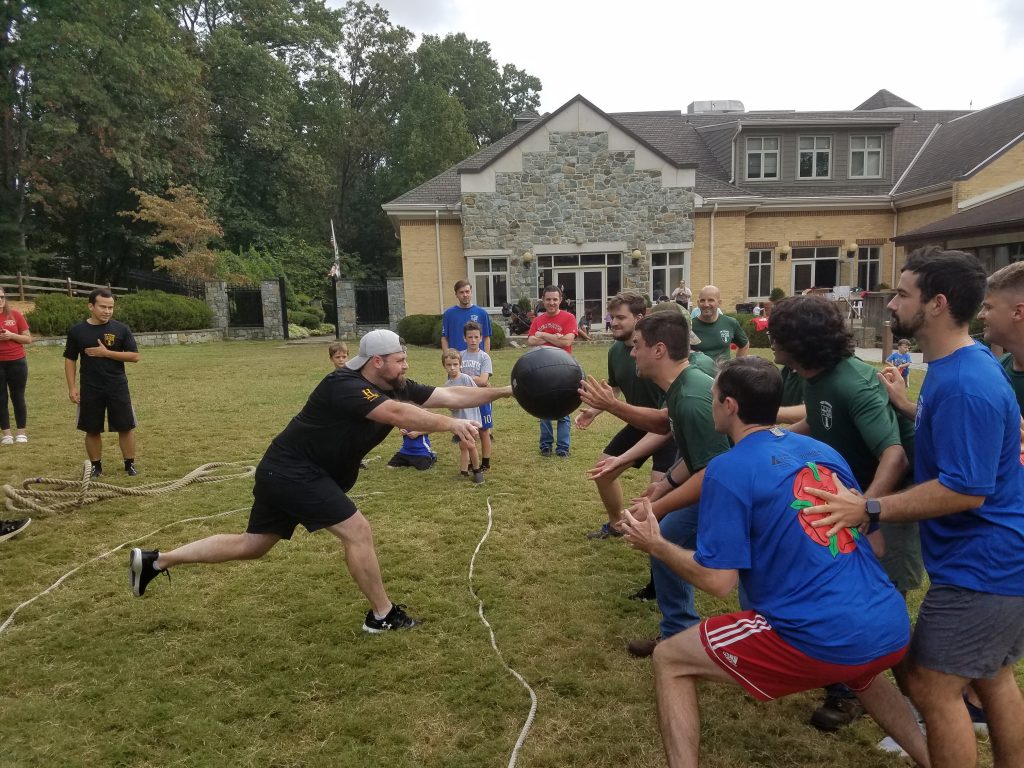 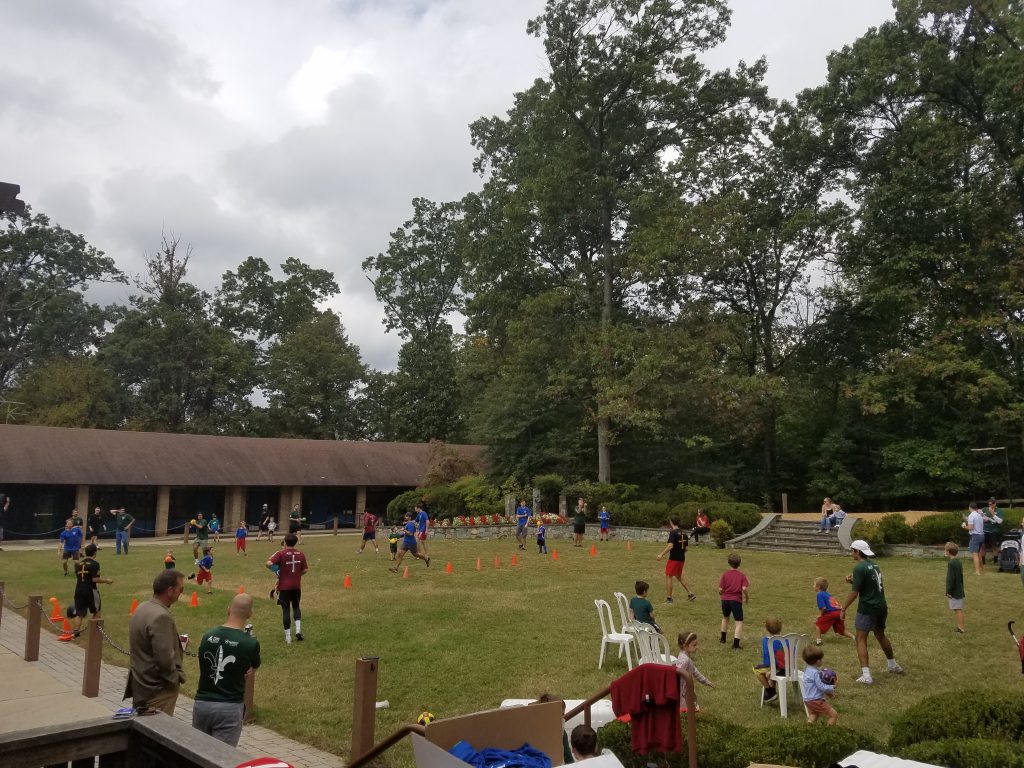 Murderball in the Courtyard 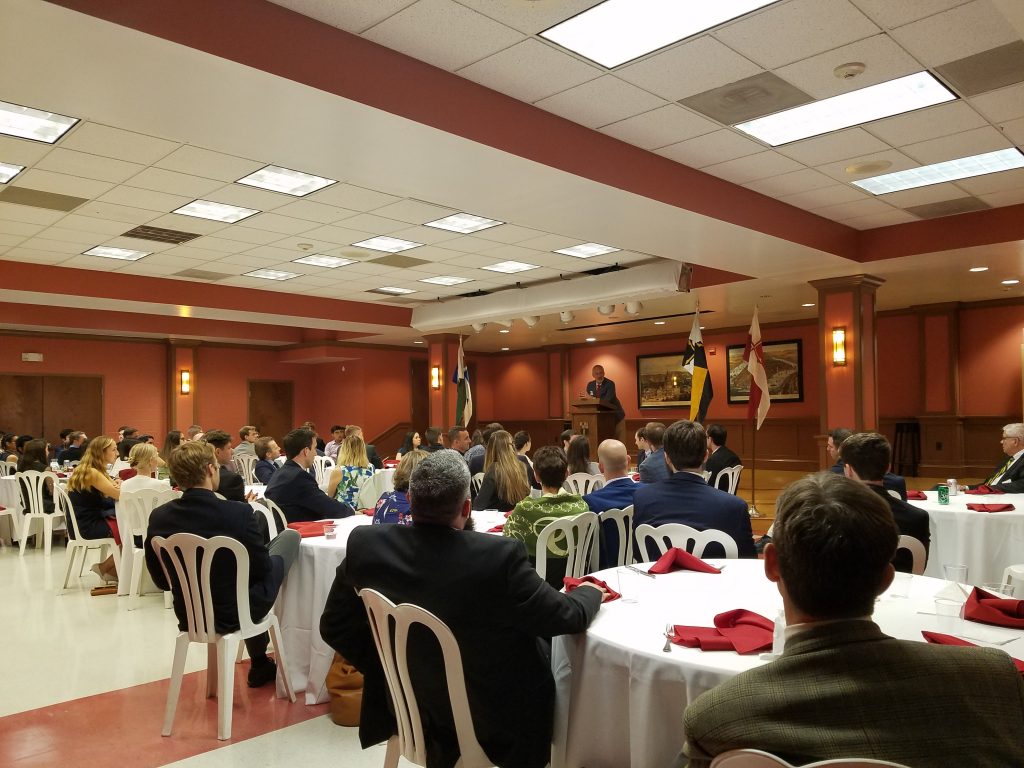 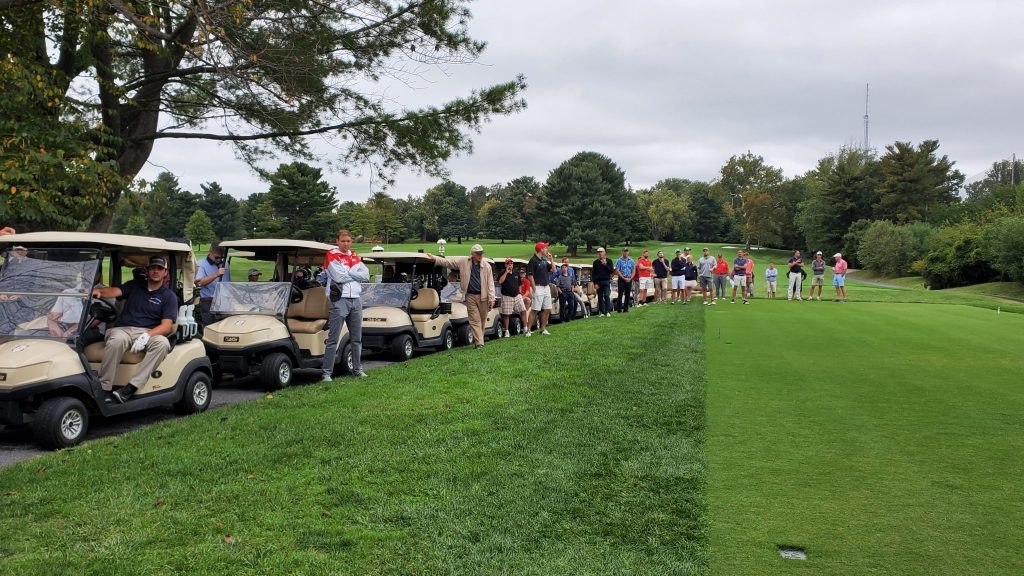 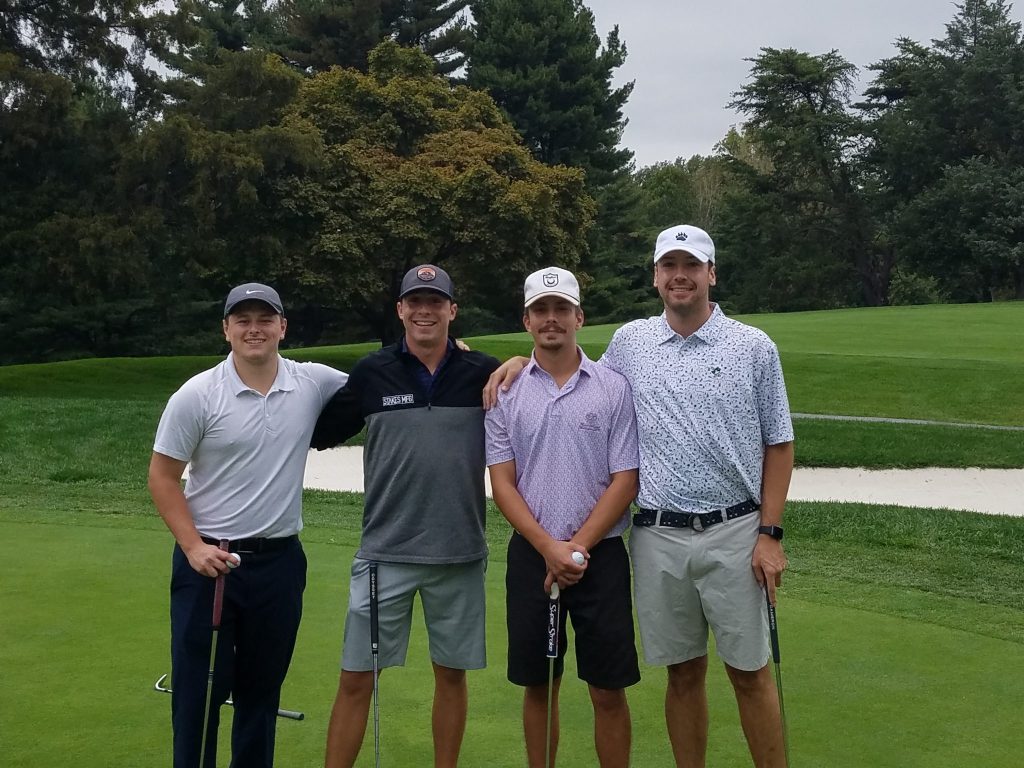 Alumni on the course