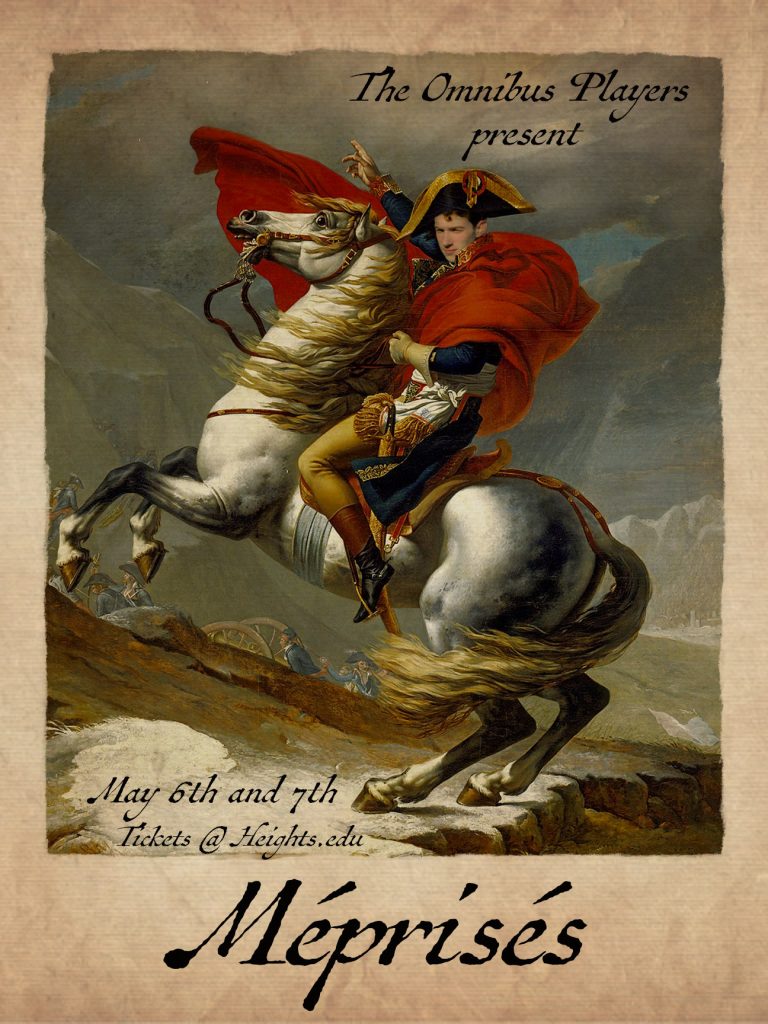 Drama and the arts are an essential part of a well-rounded education. The positive effects of drama education are well-documented, and include confidence, communication skills, self-discipline, sympathy for others, and imaginative insight into life. Educational theatre is unique among taught subjects because it makes the enactment and cohesion of all these traits a primary objective.

In addition to the development of these character traits, Heights drama seeks to accomplish three things:

First, creative expression. Ex-pression is a pushing-out. A seed breaks out of the earth. A child breaks forth from the womb. Ex-pression is growth into the fullness of life, and education in expression encourages and refines that growth. Creativity is humanity’s attempt to imitate the Creator of all things, not ex nihilo, but as recreation. Both expression and creativity must be directed and refined to achieve the fullest growth.

Second, complementary and simultaneous Christian and artistic life. Christianity and artistry seem to have gone separate ways in our society. Christian attempts at art (in song and film, especially) are often cliché and saccharine, and the artistic and theater communities often spurn Christianity. Education in creative expression, in our profoundly Christian community, is hopefully a small movement toward bridging that gap.

Third, “Omnia Omnibus”. Performance and creative design are either selfless or selfish. An actor or designer can create in order to gratify his own desire for applause, or he can be making a sincere attempt to give the audience a beautiful gift, tended and developed over several months of committed work. Drama students at The Heights should give themselves to this project. Becoming “Omnia Omnibus”, we hope to serve and inspire whomever is in our audience and in our community.

The Omnibus Players crest is blazoned as follows, in accordance with traditional heraldic terminology:

Per pale Argent and Sable a mask counterchanged; dexter a visage jovial, sinister a visage mourning. The crest a flame Argent. On the dexter side a harp, sinister a palette and brushes, all Argent. At the base the Heights arms with an inkwell Sable and quill Argent tipped Sable. The motto inscribed, Omnia Omnibus.

The different elements of the crest symbolize the different elements of a theatrical production. The central mask represents the paradoxical union of joy and grief as essential aspects of the human experience. The mask also represents mysterious and hidden truth. The crest has written words as its base, just as plays are based on written language. “Omnia Omnibus,” or “All things to all men,” is St. Paul’s description of the Christian mission here on earth, and also an appropriate motto for an actor, who assumes many disguises in order to touch and inspire all audiences. The palette and the harp respectively represent the visual and the aural aspects of theater. The burning flame upon the top stands for the physical movement that enlivens each performance and makes drama a unique art form. The tongue of fire is also a symbol of the Holy Spirit, the Christian Muse, who inspires each artist with a true and loving vision of human life.

The beautiful, humanly made thing points to a further, transcendent beauty. True beauty satisfies, pleases, and also unsettles because it does force us to wonder about what causes any beauty at all.