Alumni in the World: Texas

Back to the Lone Star State

Crescite Week 2022 saw the Alumni in the World trip heading back to Texas. The last visit to Texas was in 2017 and we only traveled to Dallas. This year we were able to visit the four largest cities in the state along with four universities while meeting up with 29 Heights alumni! Paul McGiffin ’15 who joined The Heights staff this year accompanied me on the adventure along with twelve Heights seniors.

After arriving in Dallas on Sunday, February 27th, we drove out to the Fort Worth Stockyards for some real Texas BBQ and a little taste of cowboy culture.  We spent the evening with Liam Murray ’19 who also showed us around TCU, which included a chance to run around on their football field.

Monday morning kicked off in Iriving with a mini 2006 reunion as Pat Quine and John Swink had breakfast with us before we set out for the University of Dallas. UD was the largest gathering of Heights alumni for the week with 11 guys (James Fairbanks ’18, Max McCabe ’18, Tim Naegele ’18, Nick Beatty ’19, Kevin Corkery ’19, Antonio Ruiz ’19, Billy Barvick ’20, John Messenger ’20, Joseph Moynihan ’20, Thomas Schindler ’20, and Michael Walsh ’21)  meeting up with our group to show guys around, catch up, and share their experiences.  Former UD student Sergio Porres ’02 also came by campus on his lunch break. Monday evening we shared an amazing dinner with 2011 classmates, Paul Wnek and Austin Ferguson. Paul is Founder, CEO, & Principal Solutions Architect of Coalescence Cloud Consulting, a rapidly growing IT Services and Solutions firm and Austin is a Senior Analyst at Capitalize Analytics.

Tuesday was filled with driving as we headed southeast to Waco and Baylor University. We stopped along the way at the Czech Stop for some of their famous Kolaches. At Baylor, we saw Alex Bonadio ’18, John McCreary ’19, and Joe Byrne ’20 who gave us a tour of campus.  Our next stop was Texas A&M in College Station. We met two Heights alumni currently in the Corps of Cadets at A&M, Wyatt Vance ’18 and John Diederich ’19. After a great day of college tours, we drove to Austin so we could get an early start in the state capital on Ash Wednesday.

Early Wednesday morning, we were able to attend Mass at the incredible Saint Mary’s Cathedral just a few minutes’ walk from the State Capitol. Danny Mittnacht ’06 scheduled an awesome tour for us at the Capitol building, which is of course 15 feet taller than the U.S. Capitol. Danny couldn’t join us but Ed Check ’82 was able to spend the morning with us.  We closed out Wednesday with pizza at Home Slice with Cole Estrate ’11 who shared his experiences in Tech Sales.

Thursday was another early departure as we headed for San Antonio. Along the way we refueled at Buc-ee’s and got breakfast. Arriving in San Antonio we spent the morning and early afternoon with Gabriel Pereira ’12, who works in the city. He showed us the downtown including the River Walk and the Alamo. We also ate some incredible interior Mexican food at La Gloria at his recommendation. After lunch, we drove out to Mission San Jose where we met up with Dr. Lee Cancio ’76 who has worked for many years at the U.S. Army Burn Center in San Antonio. He shared his experiences from The Heights, his path to medical school, and some of his experiences on deployment with the Army.  Our last stop in San Antonio was Trinity University to see Jay Sciortino ’20. The guys really enjoyed seeing the campus and playing football on their field.

Late that afternoon, we set out for our final destination, Houston! Friday morning we headed to PNC Stadium, home of the Houston Dynamo Football Club. Stefano Agostini ’13, the Event Services Coordinator for the Club gave us a full tour and great insights to starting a career in sports. This began with an unexpected jersey swap and featured The Heights logo on the stadium jumbotron! After the stadium, we had lunch with Isaiah Grigsby ’14, an Application Security Engineer at StockX. Isaiah shared his experiences in cybersecurity and thoughts on Houston. Our last stop in Houston was Western Academy, which was founded by teachers from The Heights and continues to thrive in Houston as a 3rd-8th grade all-boys school. After seeing the campus, the guys played sports while Paul McGiffin and I visited with the faculty (which includes multiple Heights alumni), who we felt right at home with immediately.

Saturday morning we departed Texas for the DMV with many memories and Texas-sized adventures to share! Next year we hope to travel to New England with other stops along the way! Stay tuned for more. 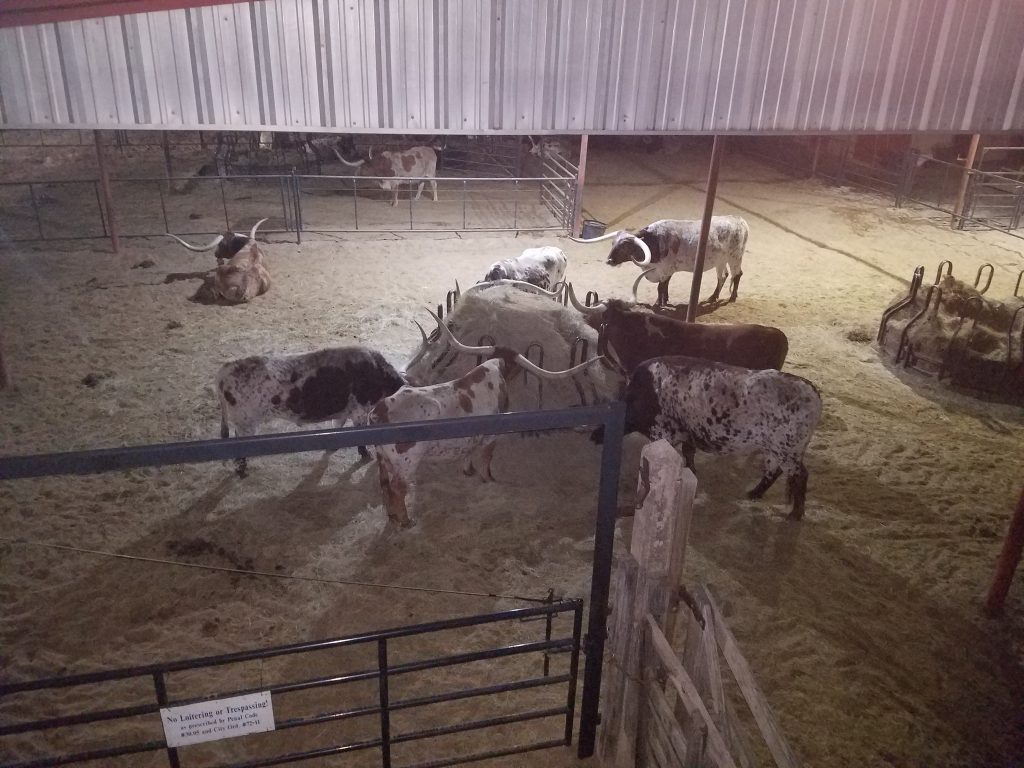 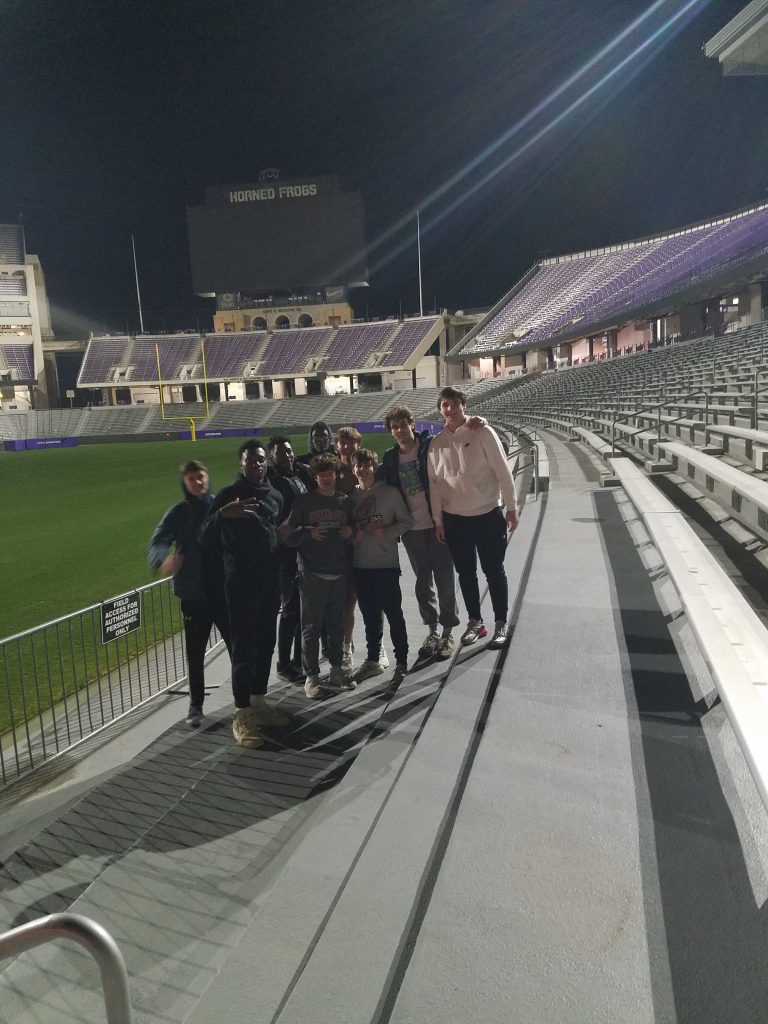 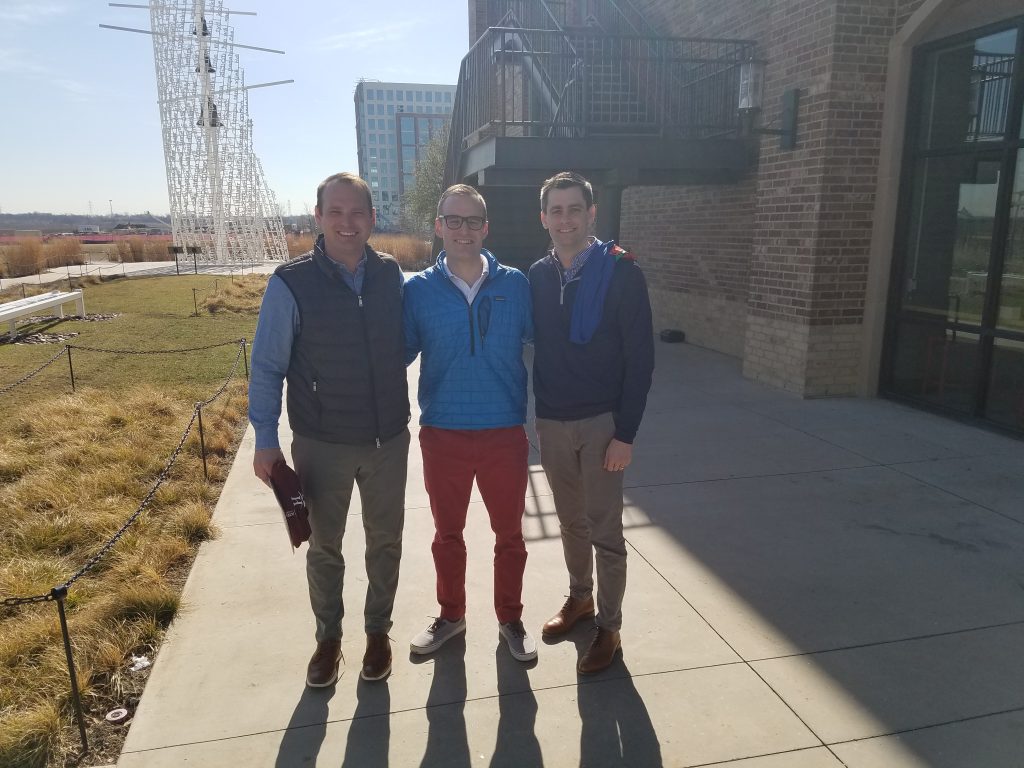 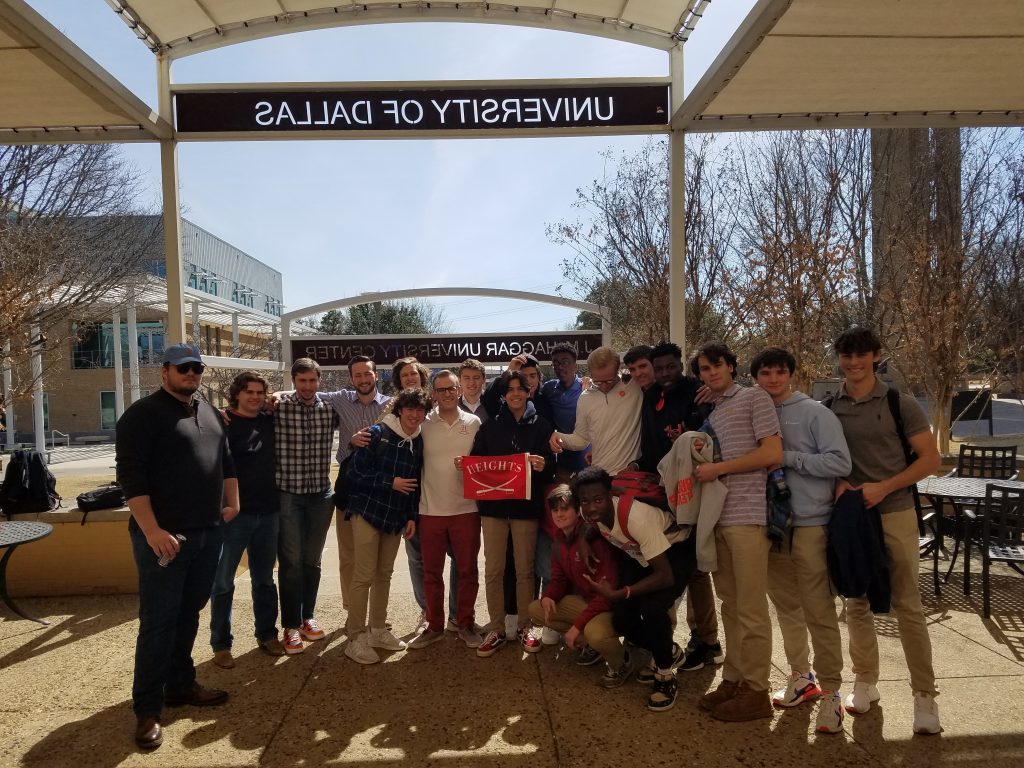 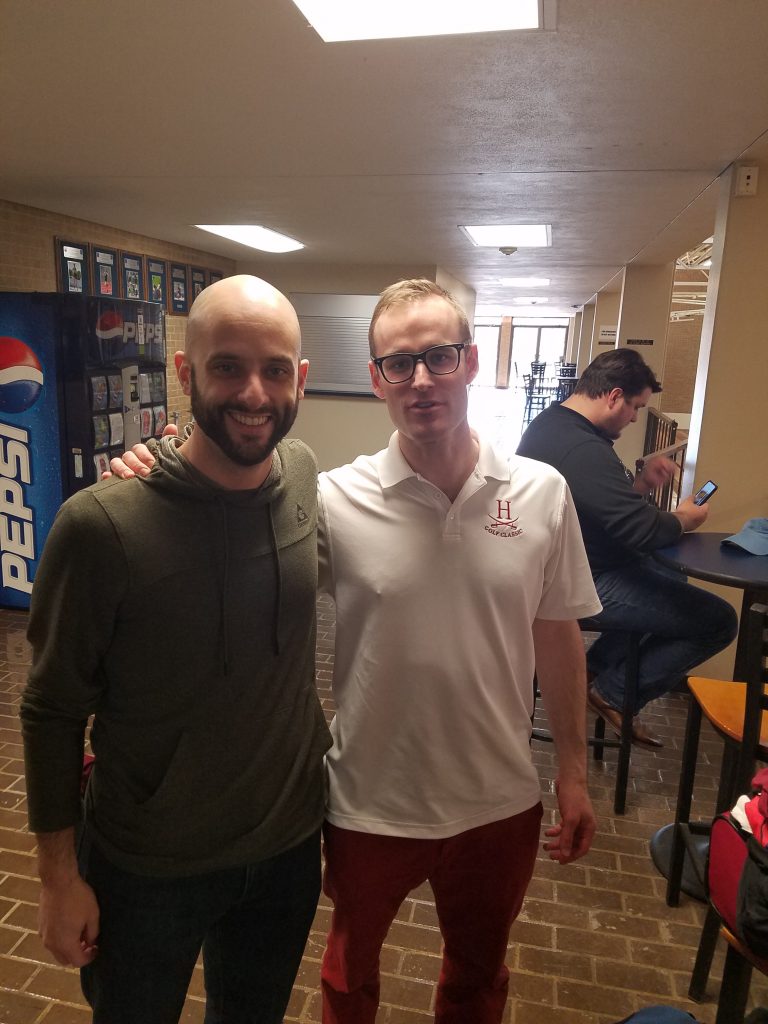 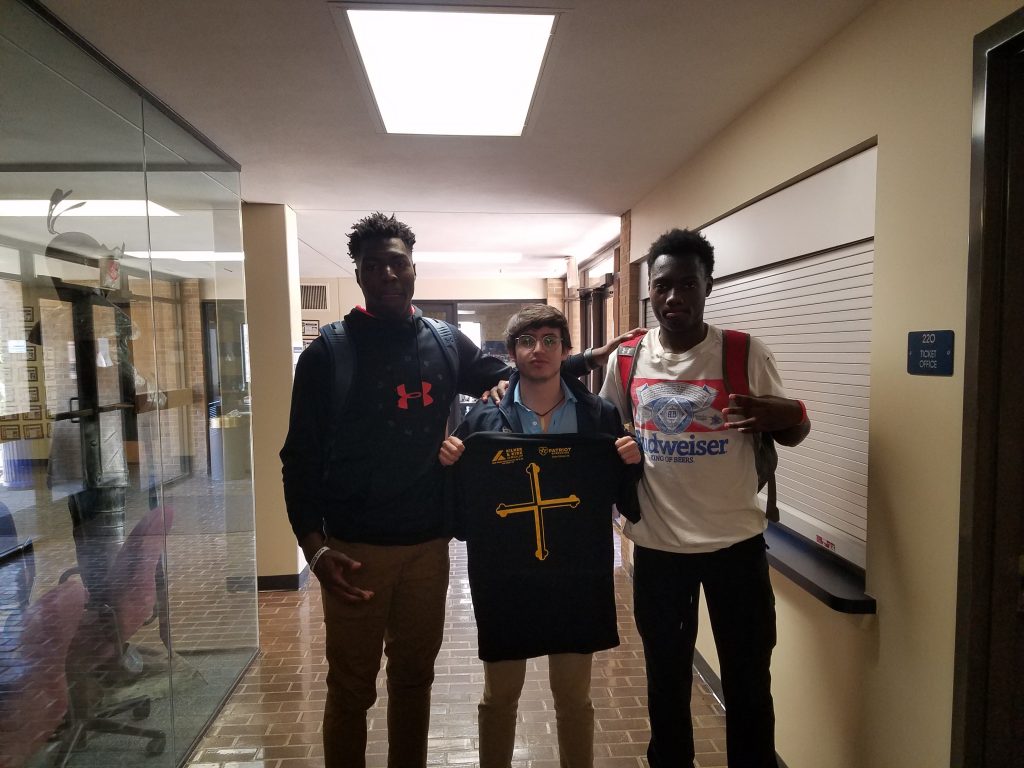 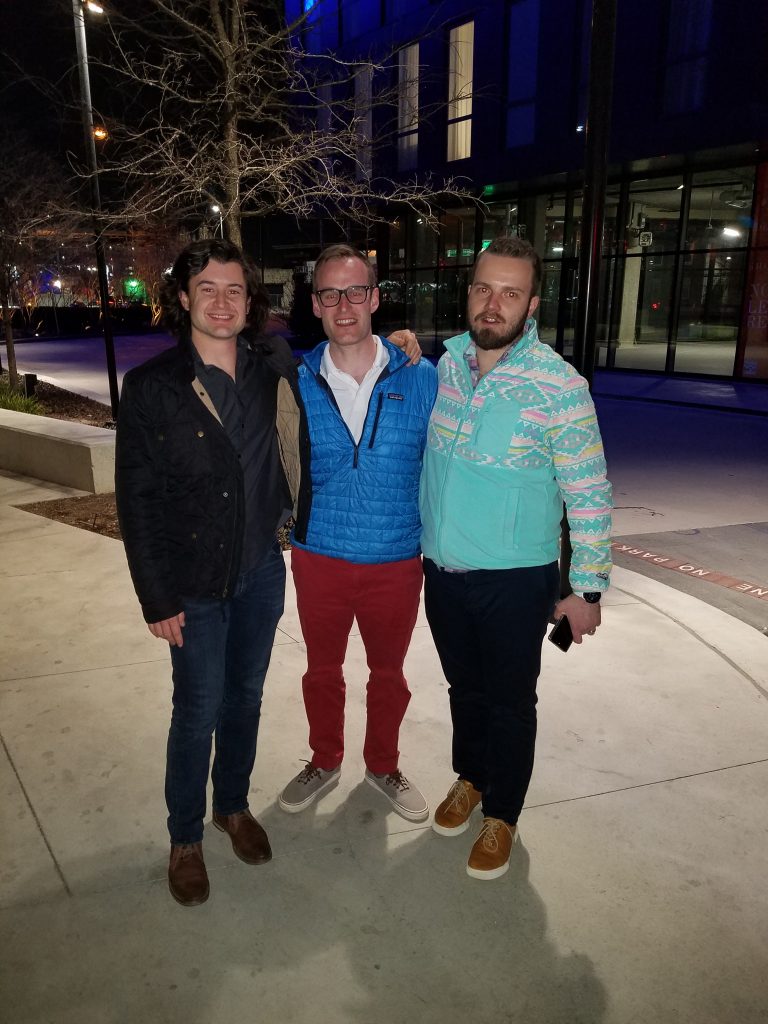 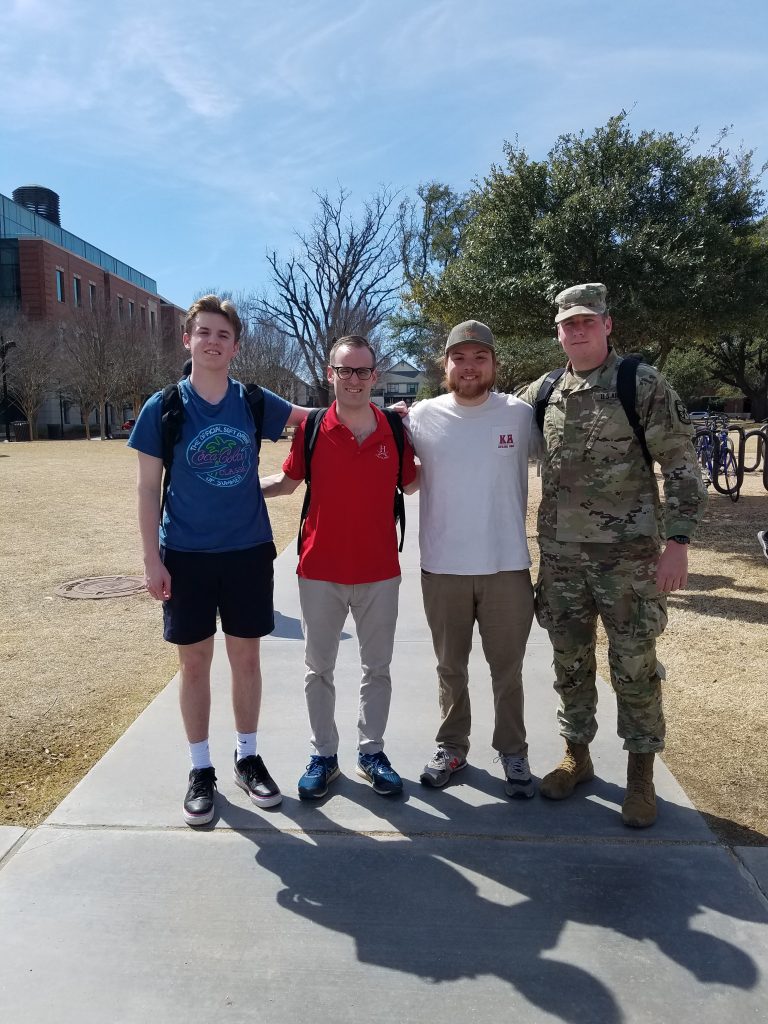 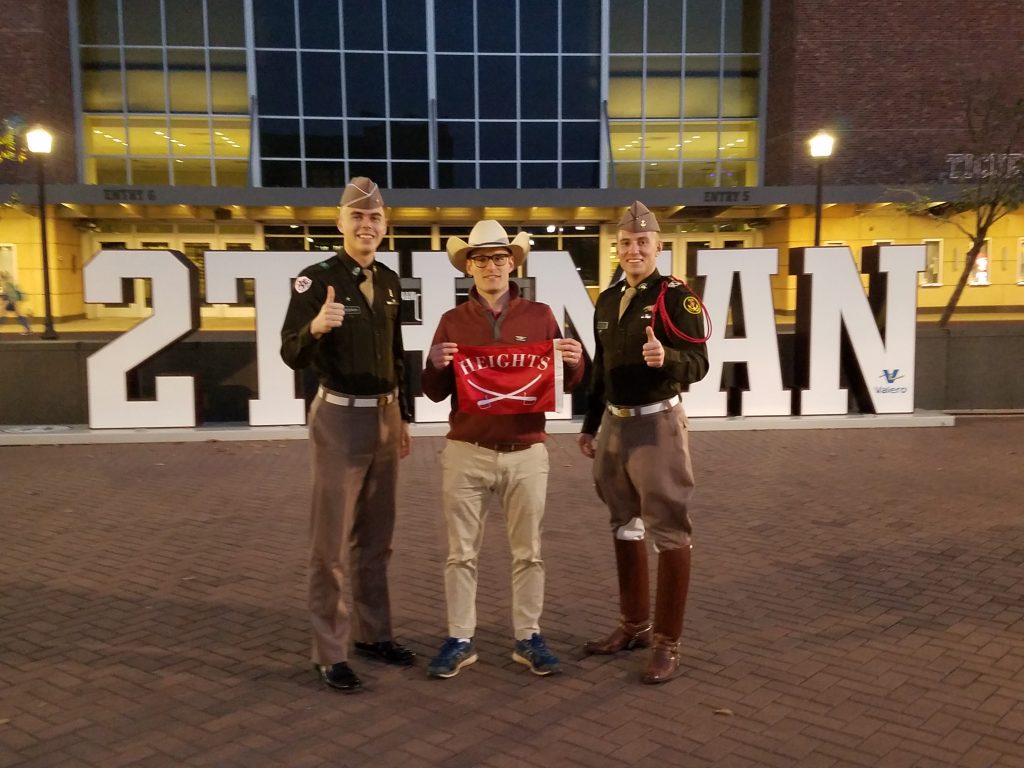 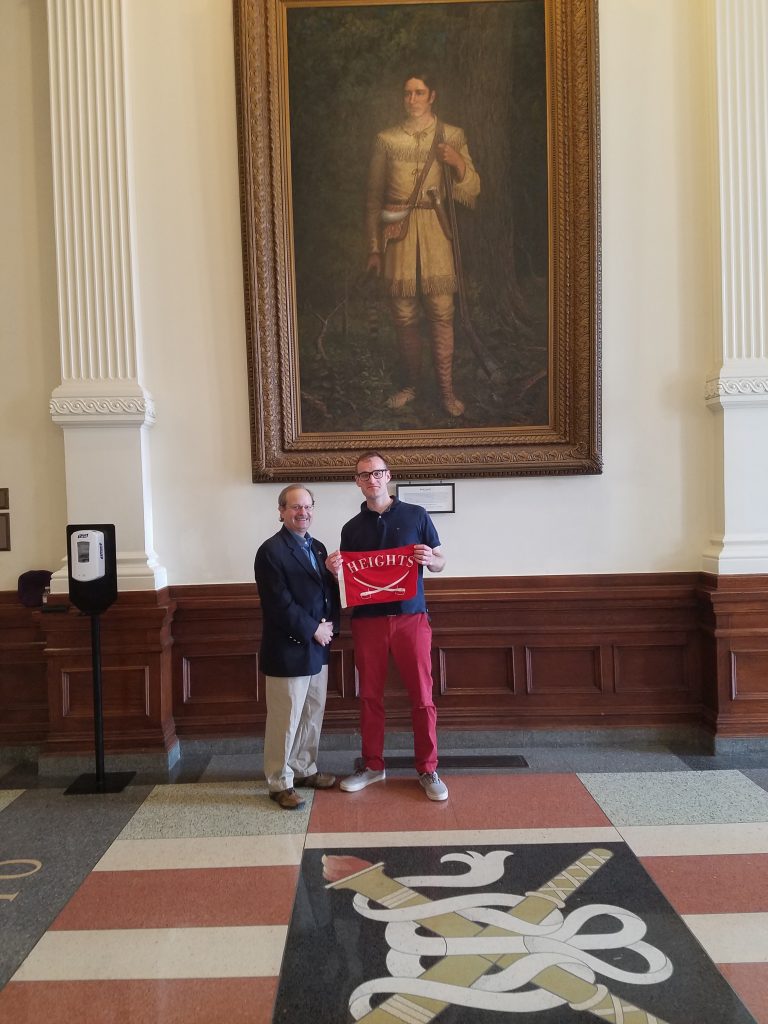 Ed Check '82 at the State Capitol 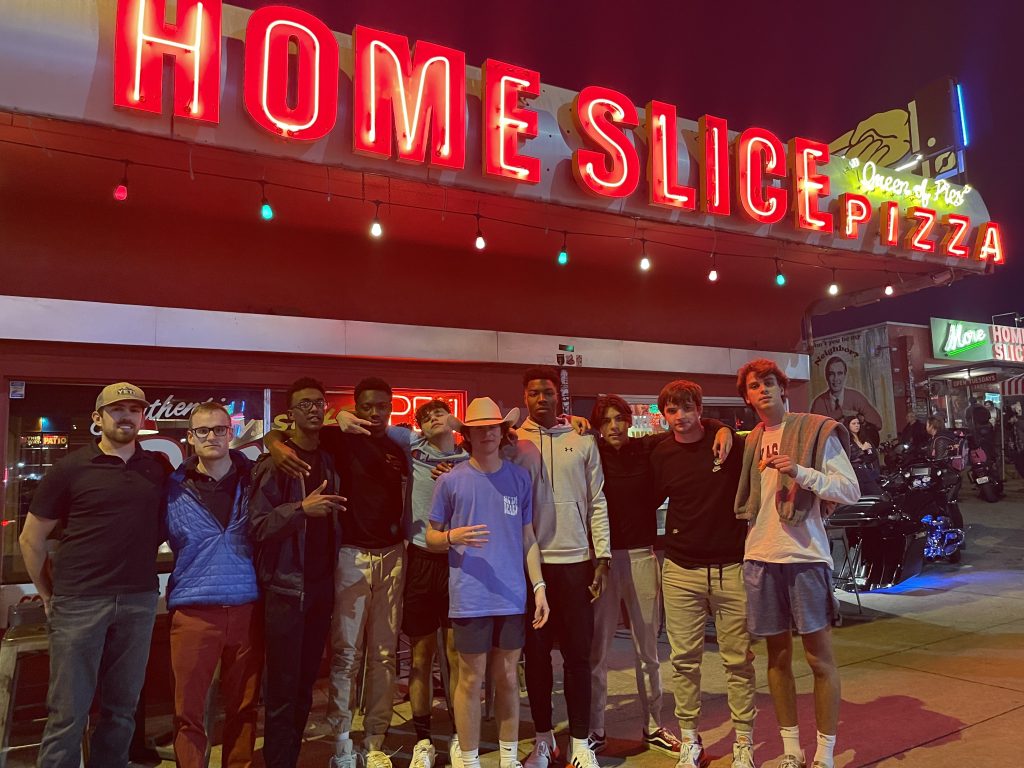 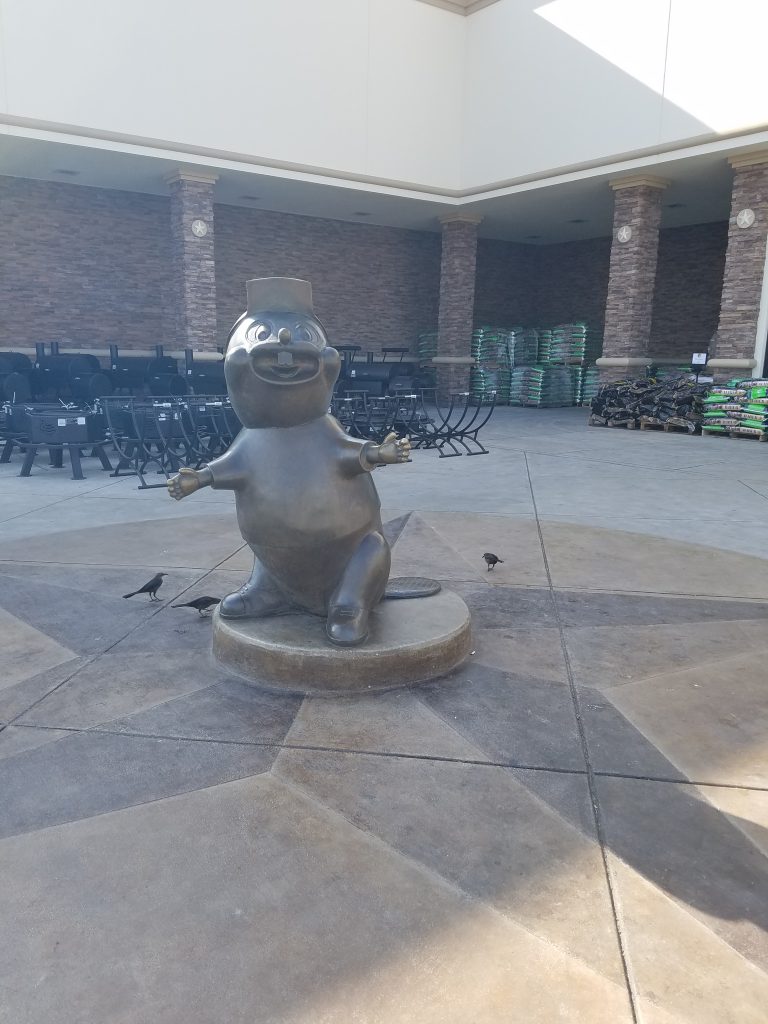 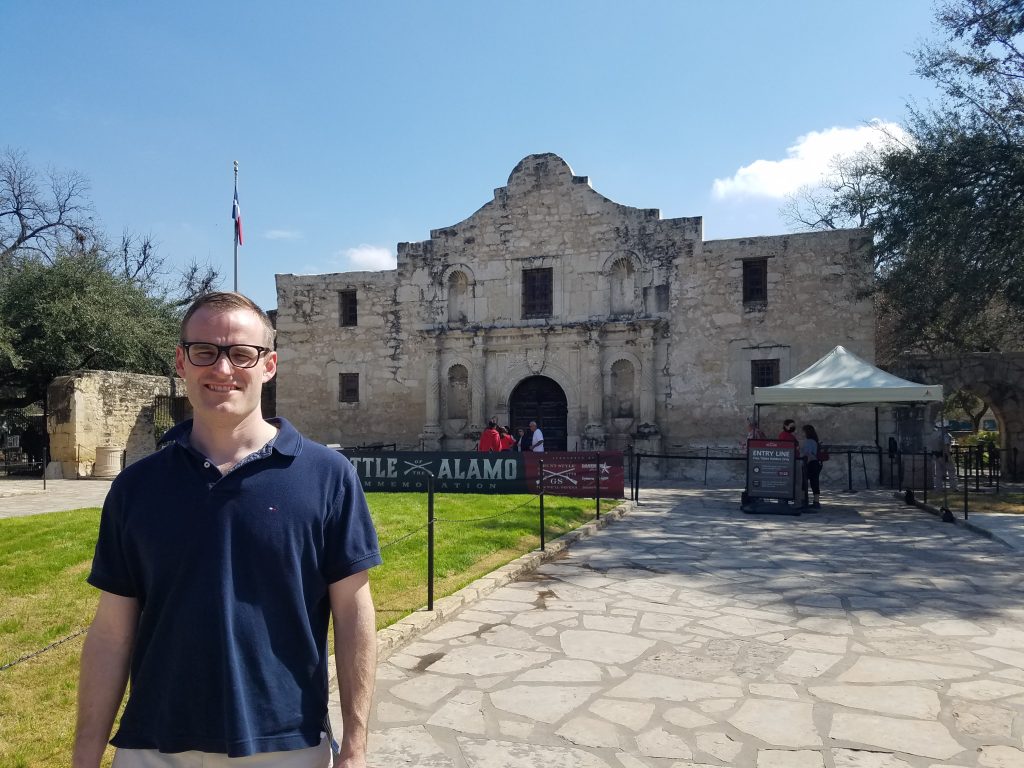 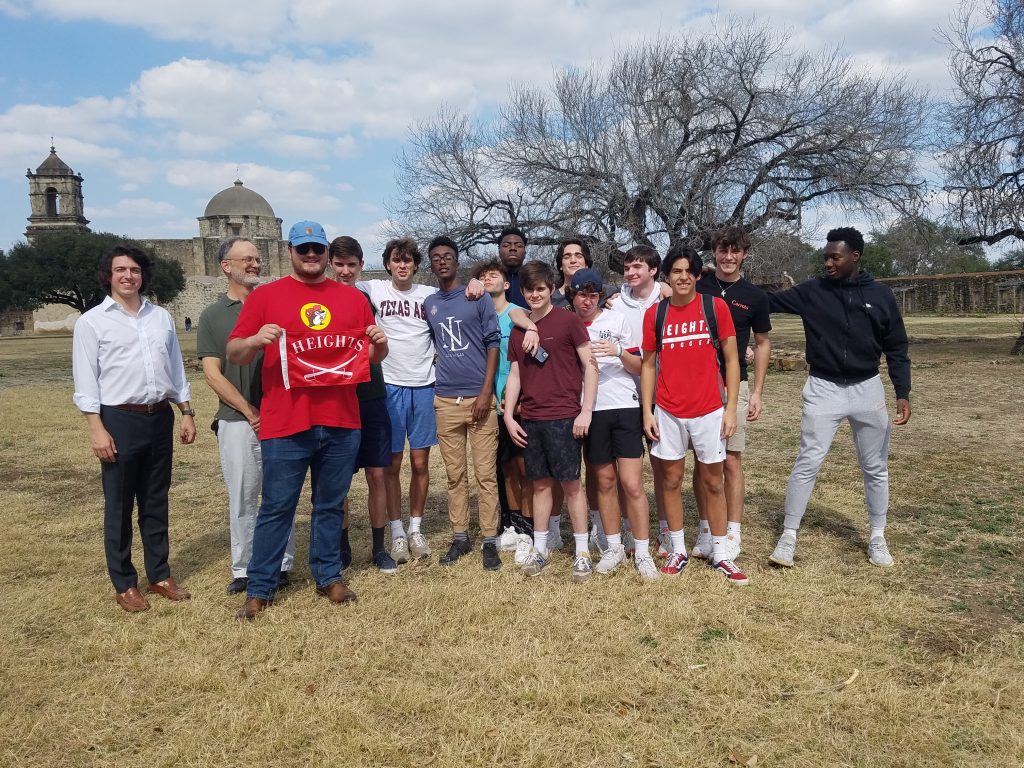 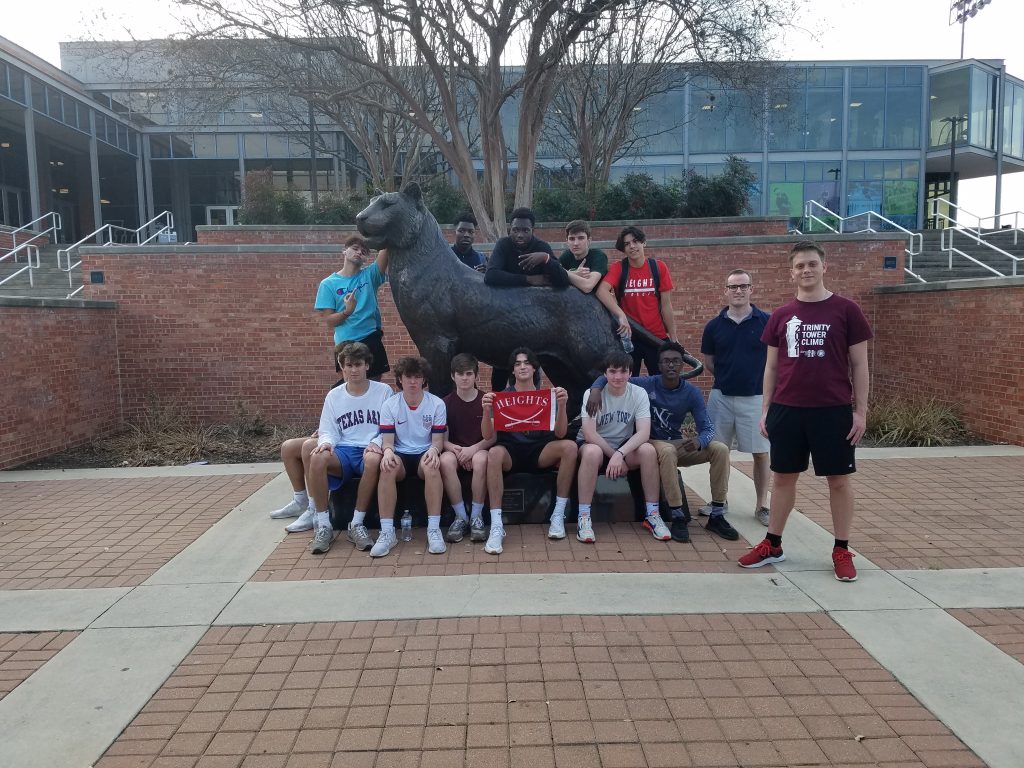 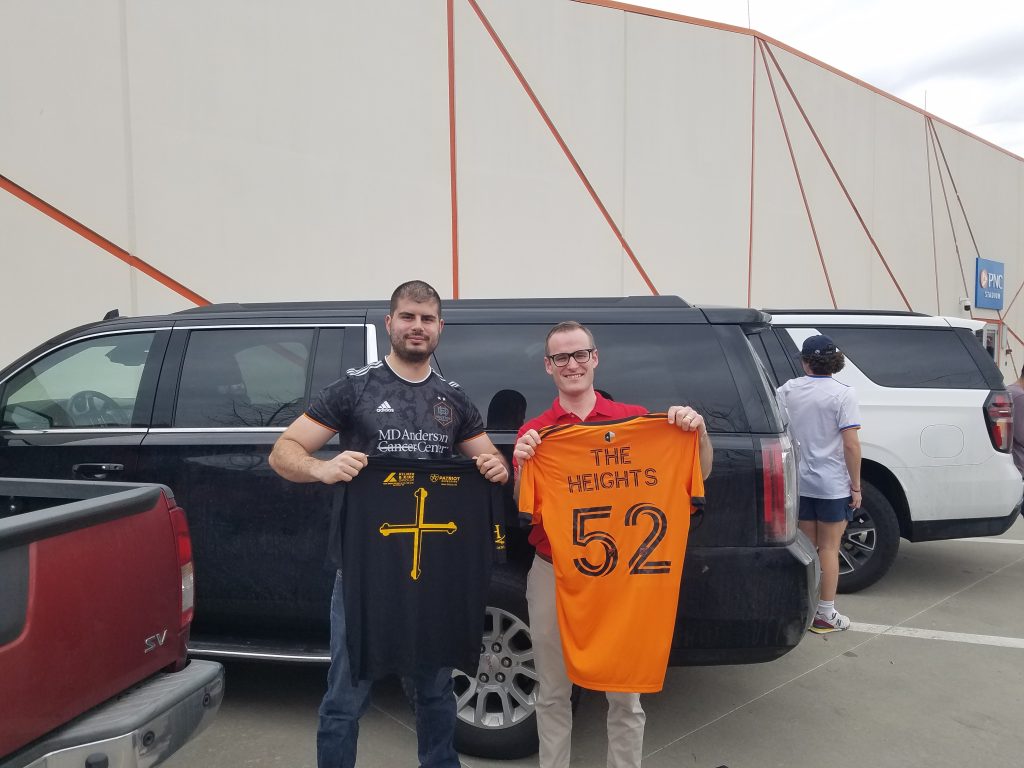 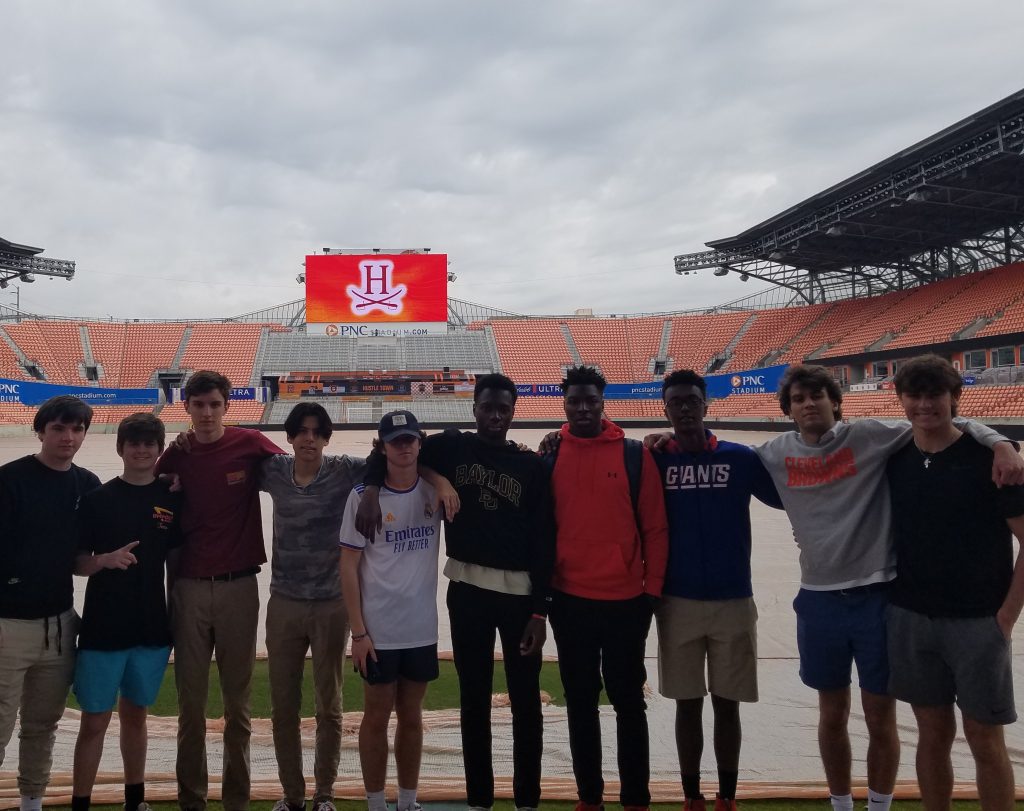 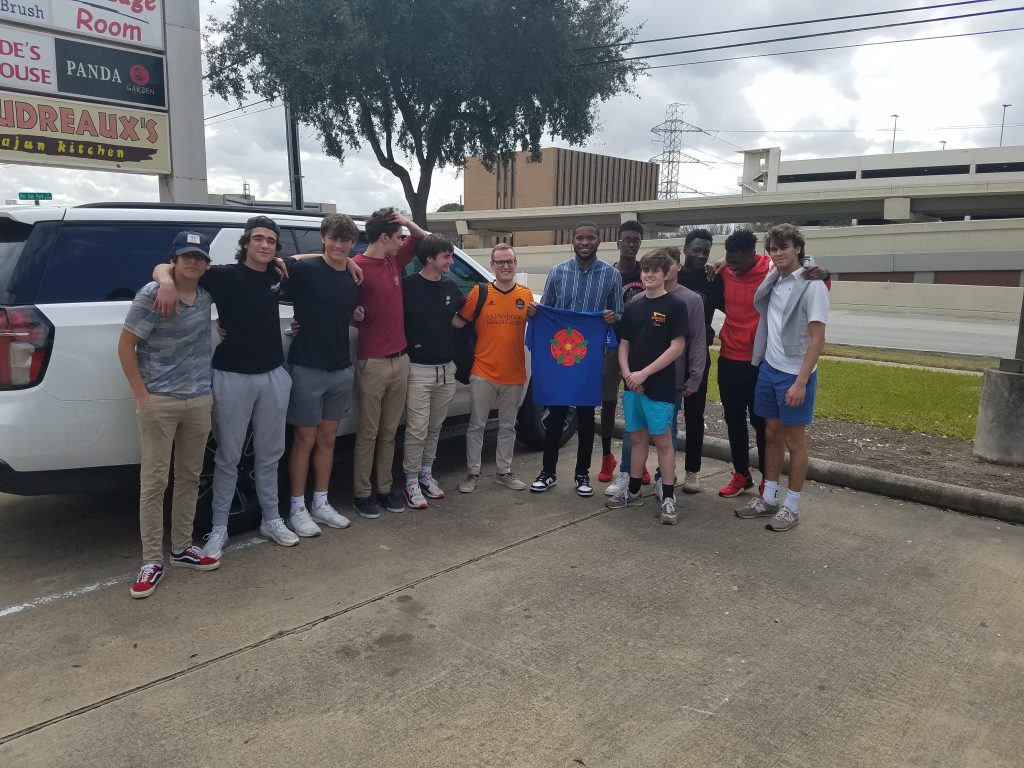 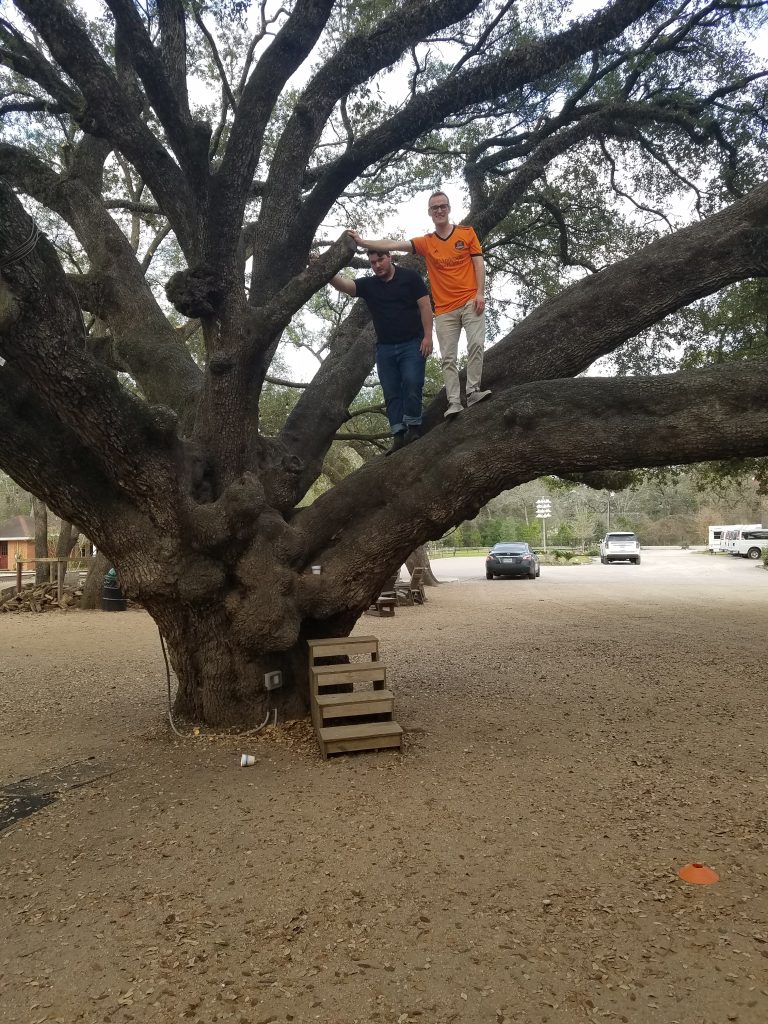