Now a Crescite Week staple, Alumni in the World is an opportunity for current Heights students to visit alumni in different parts of the country to learn about their professional and educational experiences. Past trips have visited a variety of locations near and far including Washington, D.C., Annapolis, New York City, Dallas, Los Angeles, San Francisco, Charlotte, Greenville, and Atlanta. This year’s trip ventured into the Midwest and connected with 24 different Heights alumni studying at or living in Notre Dame, Wheaton College, Chicago, Hillsdale College, and Pittsburgh.

The adventure began Sunday, March 1st with a 7:30 am departure from The Heights. Mr. Mike Ortiz drove our 9-foot high van all the way to South Bend, Indiana for our first destination, the University of Notre Dame.  Current ND students: Jack Ferguson ’16, Vincent Buono ’16, Philip Spence ’16, Michael Moynihan ’16, Trey Mohler ’17, Thomas Moynihan ’17, and Jack Ryland ’18 joined us for dinner at Salsa’s Mexican Restuarant along with Joe Mehan ’08, who lives in South Bend. After dinner, Jack Ferguson ’16 brought us to the Grotto and the Golden Dome for an evening look at the campus. We returned Monday morning for breakfast in South Dining Hall with Jack Ryland ’18. After a delicious breakfast, we stopped at the Bookstore, the Basilica, and the Main Building (Golden Dome). We even got a look inside Notre Dame Stadium and had the “House that Rockne Built” all to ourselves.  Finally, Zef Crnkovich ’18 walked us around campus and showed us the Hesburgh Library before we departed.

Our next stop was Wheaton College in Illinois where Caleb Pelletier ’16 gave a tour of his beautiful campus including the original academic building, Blanchard Hall begun in 1853, the athletic facilities which are home to their highly successful Division III programs, and a display featuring a mastodon discovered near campus in 1963.  We also visited the Marion E. Wade Center which features artifacts, manuscripts, and other documents relating to seven influential British authors including C.S. Lewis and J.R.R Tolkien.  A few notable artifacts were the desk of Tolkien and Lewis and the wardrobe Lewis played in as a child.

Tuesday, March 4th we got an early start for a full day in Chicago. The morning began with the first-ever official Heights visit to Northridge, a brother Opus Dei school founded in 1981. The current headmaster is Niall Fagan, Heights class of 1999. Alex Hadley ’14 teaches English there as well. Former Heights teacher and coach Tom Kelliher is also a key teacher at Northridge. The visit began with a tour of the school followed by Mass in their chapel. Finally, our group spent time with some Northridge high schoolers. The guys quickly figured out they had lots in common.

After our historic visit to Northridge, we headed into the city for some deep-dish pizza at Lou Malnati’s with Charlie Weikel ’02 of Baxter International. Along the way, we picked up our official Chicago guide, Tim Maher ’07 who was able to take a couple of days off work to show us around his hometown.

Our next stop took us 68 floors up to the top of the Aon Center for a bird’s eye view of the city and a peek at the KPMG Ignition Center. Then we walk over to 71 South Wacker to visit Swen Harrington ’04 at Goldman Sachs. Swen discussed his path into finance and gave tips for guys interested in studying finance or banking.

For dinner Tuesday night we went to a local icon, Portillo’s for Chicago style hotdogs and Italian beef sandwiches. On the way there we all got to ride the L for the first time and spent some time at “the Bean,” Chicago’s giant bean-shaped sculpture. Heights classmates Zach Hamilton-Cotter ’11 and Andrew Wisenberg ’11 joined us at Portillo’s to share how they got to Chicago and some professional advice.

The next morning we met Peter Kolf ’79, who has been in the region since finishing his Master’s in Civil Engineering from Northwestern in the mid-1980s. After a delicious breakfast at the Wildberry Café, we drove to the South Side to visit the Science & Industry Museum and the University of Chicago. We picked up Tim Maher at St. Mary’s of the Angels, a beautiful Chicago parish run by priests of Opus Dei.

The main highlight at the museum was a tour of U505, German U-boat captured in 1944 by the U.S. Navy in an operation led by my great-great-uncle Capt. Daniel Gallery. From the museum, we walked toward the University of Chicago to meet up with current freshman, Conn Mehigan ’19. While eating lunch at Porkchop BBQ nearby, we saw Tim Murray ’05 on TV doing his show, the Daily Line on NBC Sports and he texted us from the studio! Conn Mehigan gave a tour of UChicago include Cobb Gate, the Reading Room, and the first Heisman Trophy (then called the Downtown Athletic Club Trophy) won in 1935 by Jay Berwanger.

From UChicago, we headed north to our house and said goodbye to Tim Maher ’07 since it was our last day in the Windy City. I want to extend a huge thanks to Tim who guided us through Chicago and made the whole better!

Thursday morning, we began our drive back east. Along the way, we stopped at Hillsdale College in Michigan and spent the afternoon with Jose Arevalo ’06 who is completing his doctorate. After a great lunch in the dining hall, Jose showed us the campus including the new chapel and science building which featured an impressive taxidermy collection and 2 dinosaur fossils.  We missed Flanagan Anderson ’19, a current freshman but he is really enjoying the school as well. Our final stop was Pittsburgh. Jake Brown ’06, a medical student at the University of Pittsburgh gave a fascinating talk on cardiac surgery, his specialty. The whole group loved his talk and asked many questions.

On our final morning, we saw Andrew Kolesar ‘14, a UPitt law student for breakfast and visited the Cathedral of Learning (tallest academic building in the US) and the Heinz Chapel on Pitt’s campus. We then met up with Joe Zischkau ’08 and his brother Matt ’17 at Carnegie-Mellon University where Matt is a junior. Joe graduated from CMU and now works for Google in Pittsburgh. After a tour of the academic buildings and some races on the track, we went to the Union Grill for “the ultimate fish sandwich.” The fish did not disappoint but as we walked out it started pouring rain, a clear sign it was time to head back to The Heights!

This was truly an excellent week and we were all incredibly grateful to see so many Heights alumni at their college campuses and in their new homes! 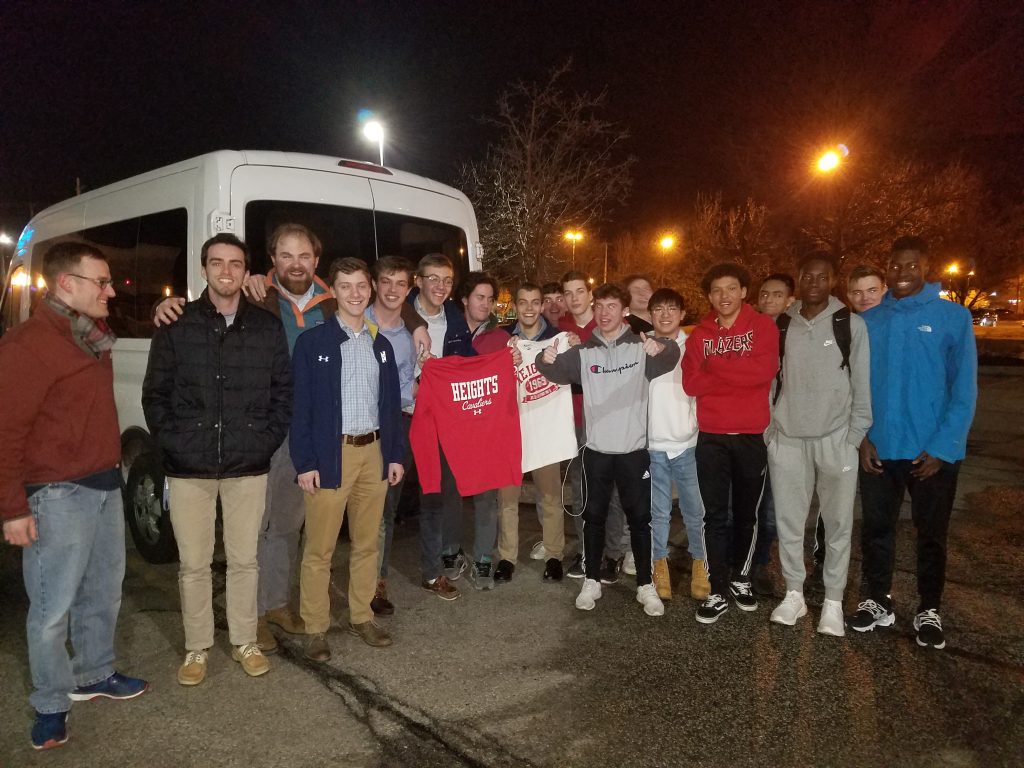 After dinner in South Bend 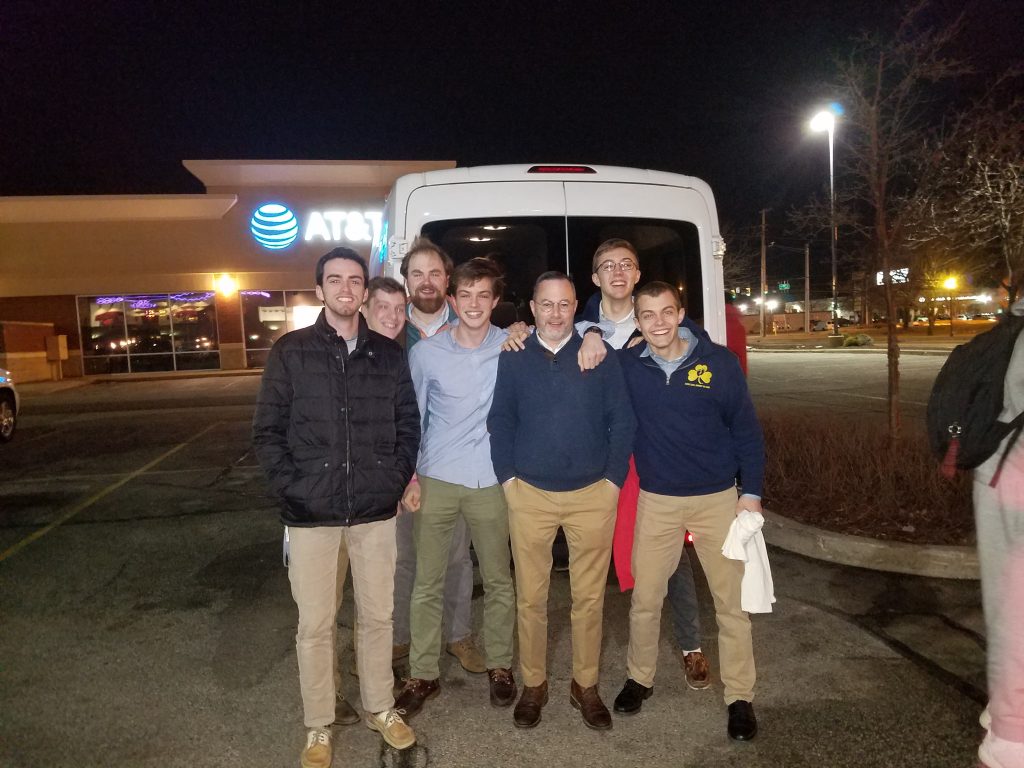 Mike Ortiz with his former students 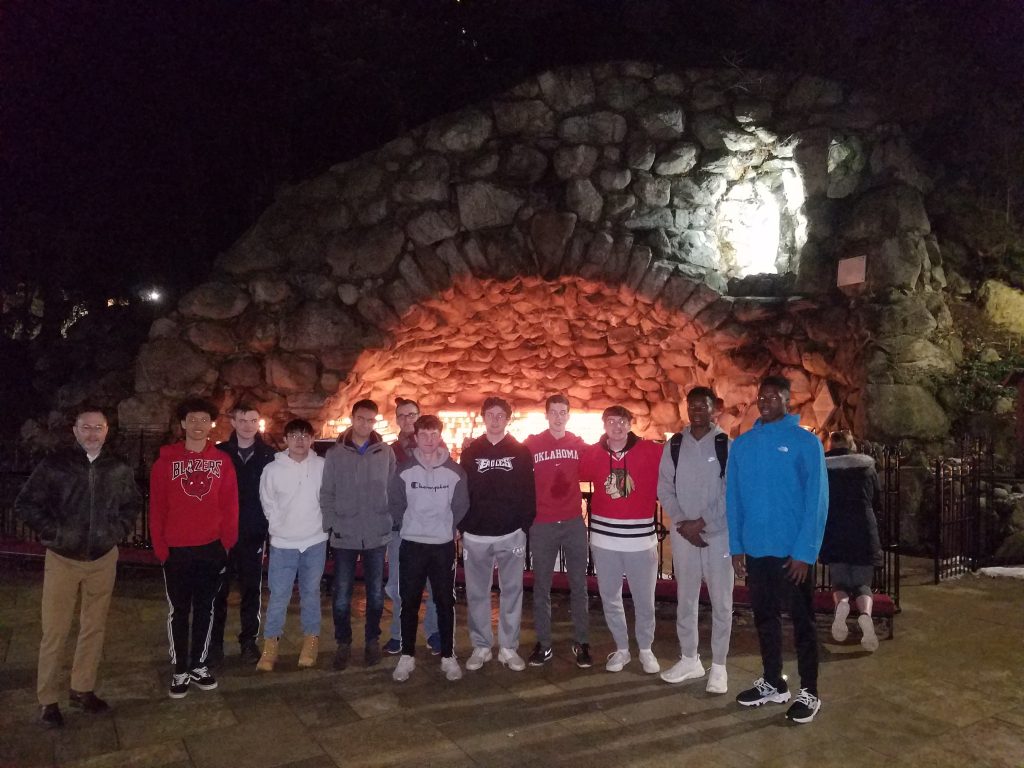 First stop on campus, the Grotto 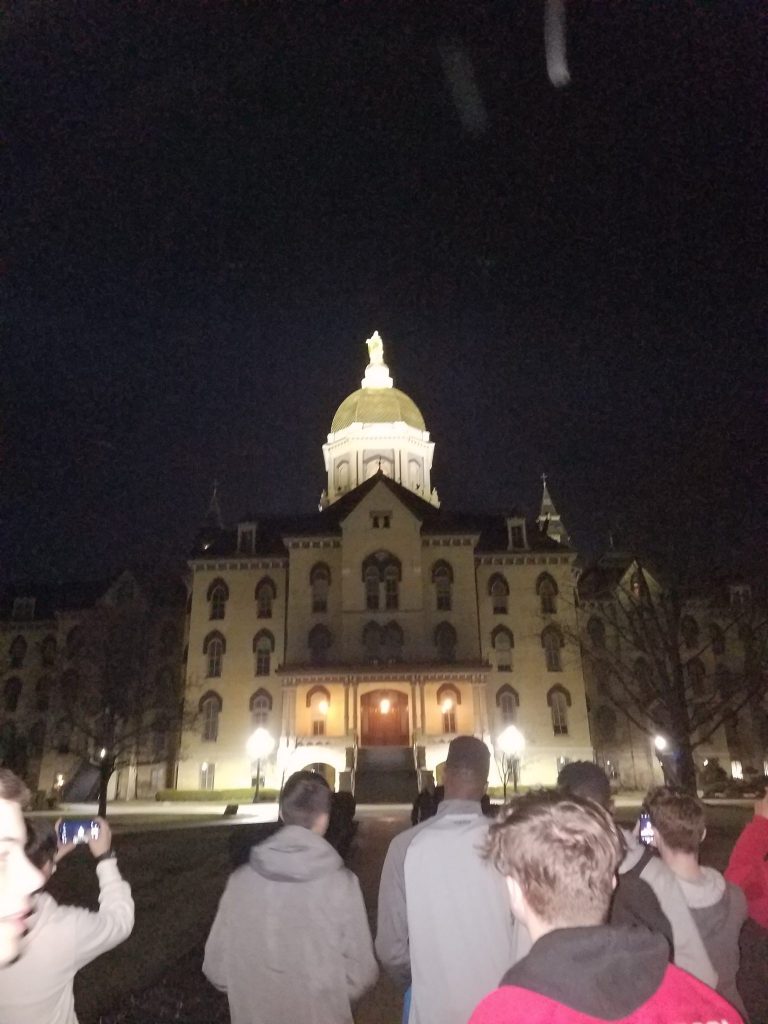 The Golden Dome at night 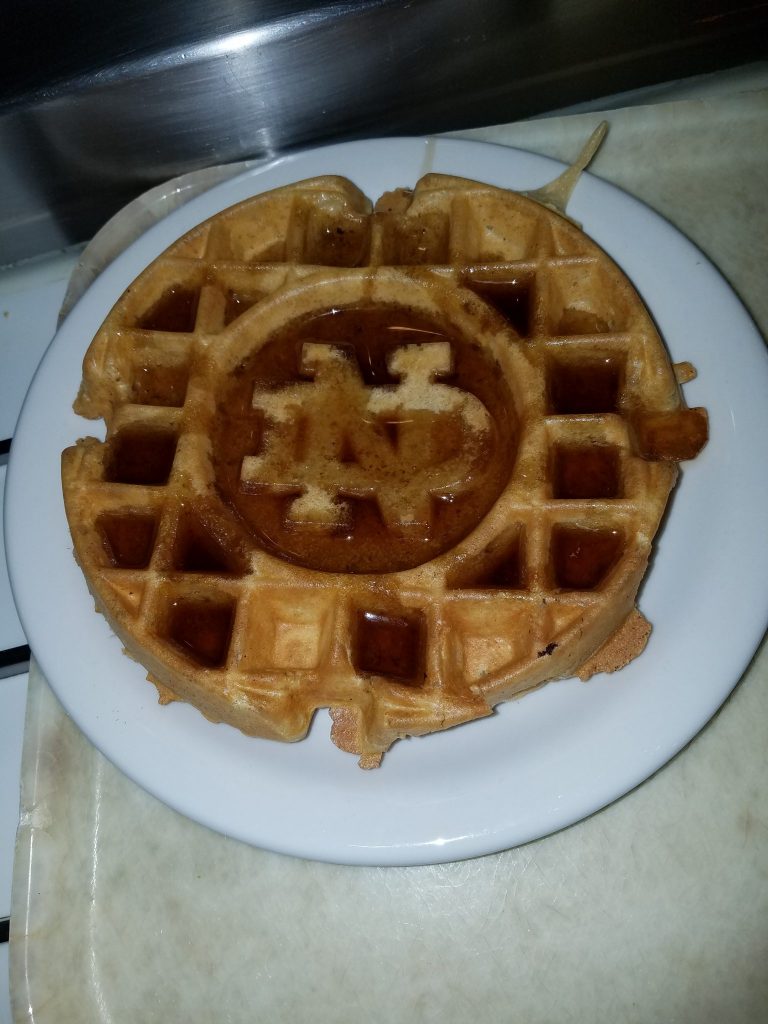 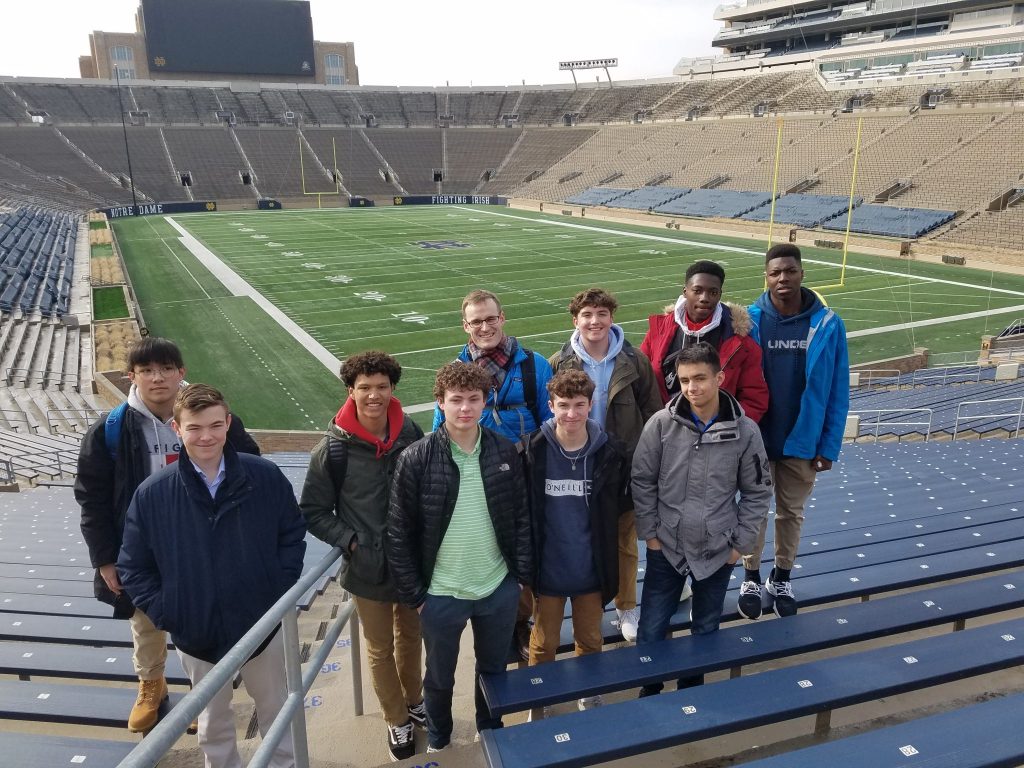 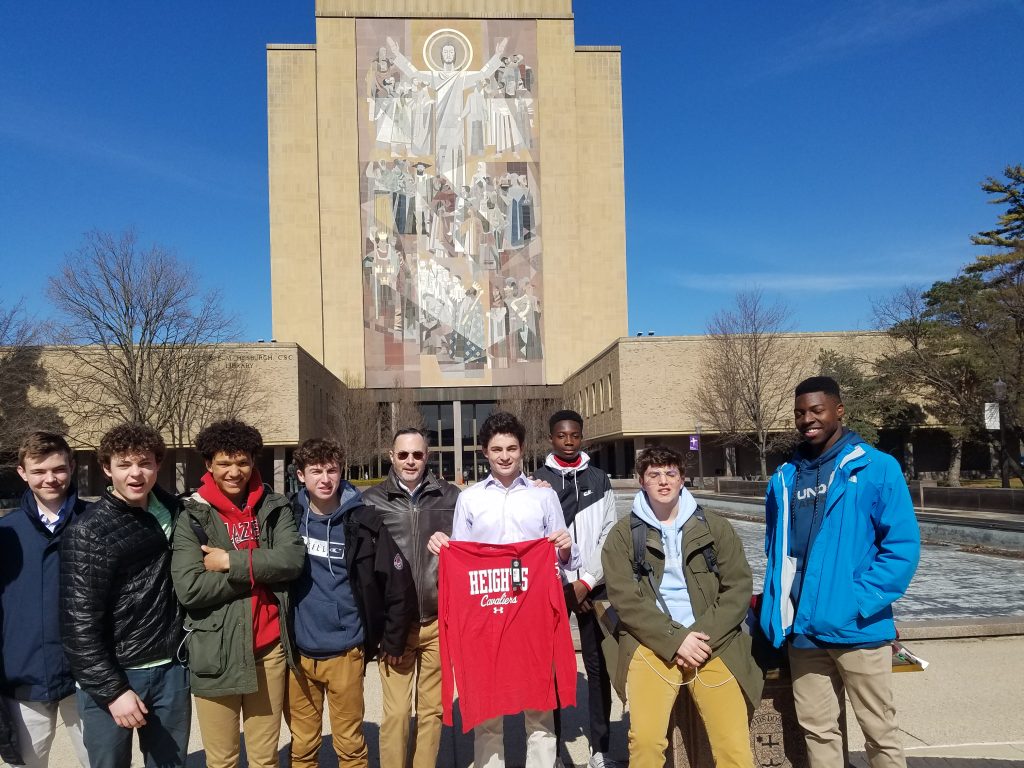 With Zef Crnkovich '18 in front of Touchdown Jesus 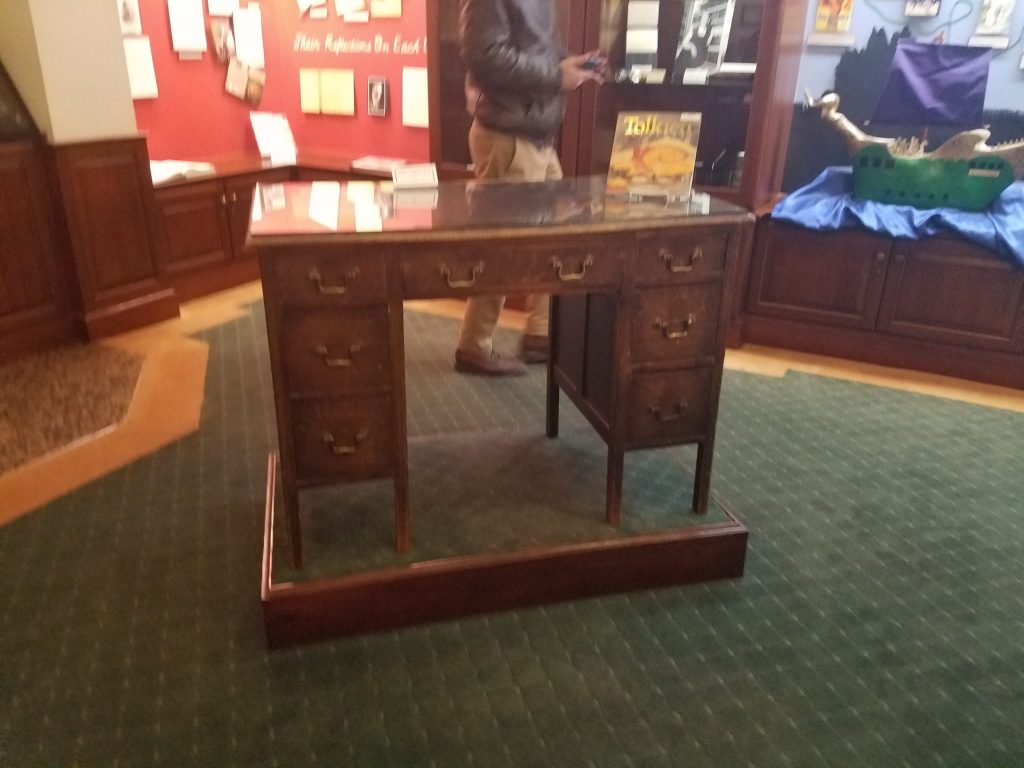 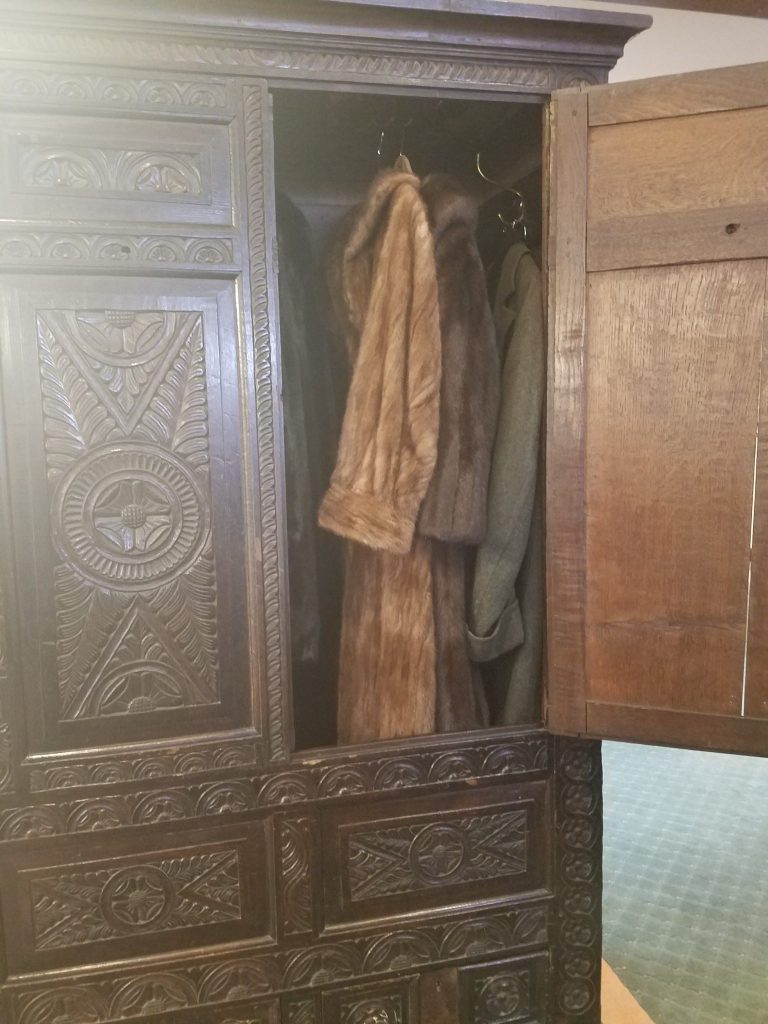 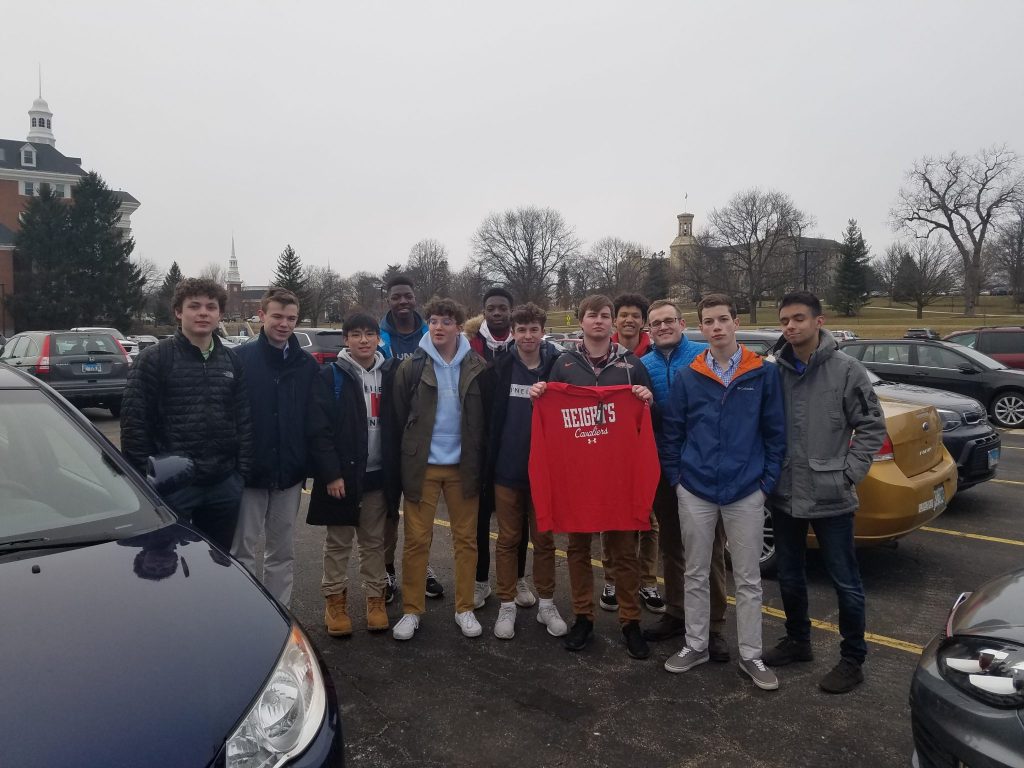 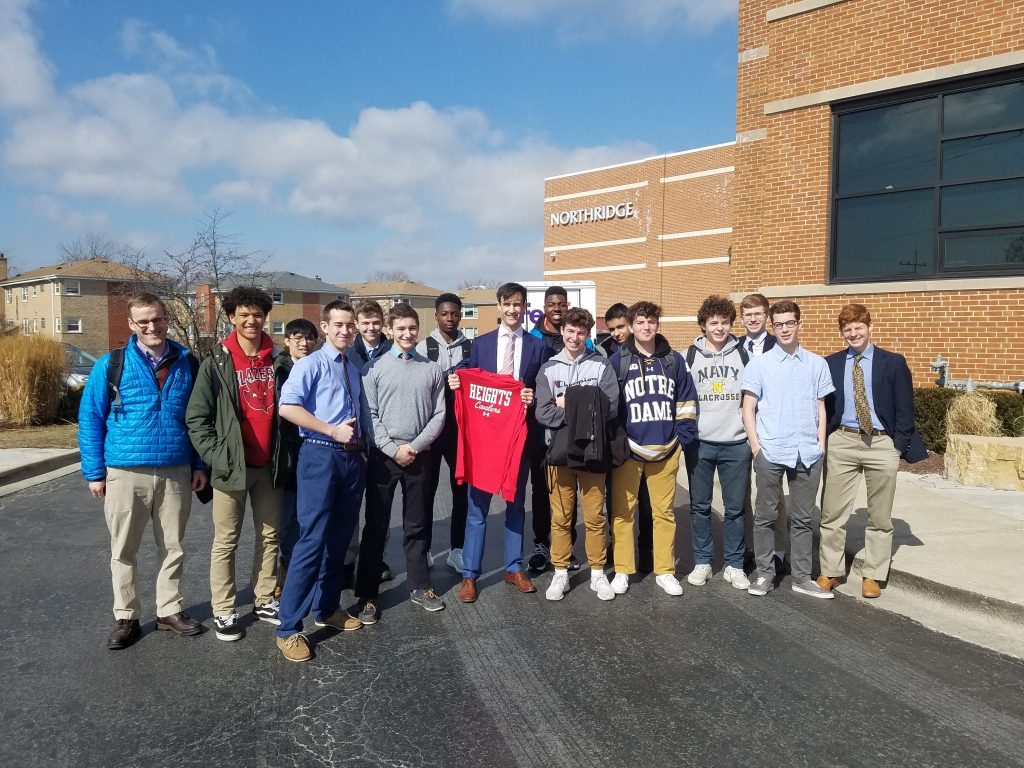 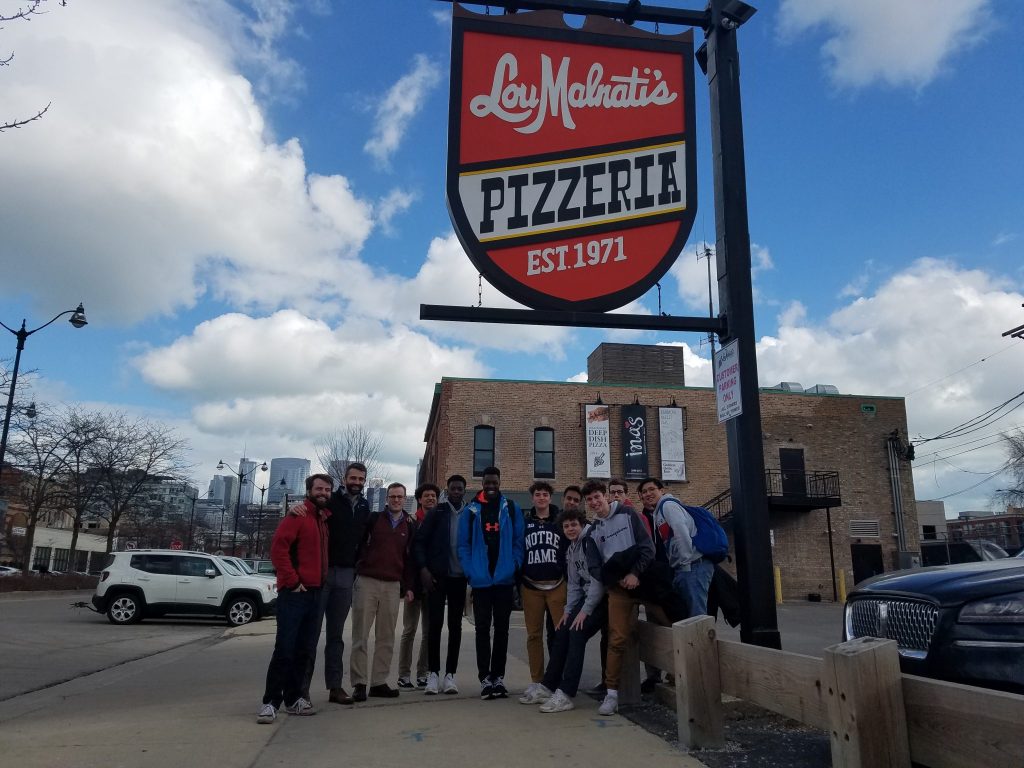 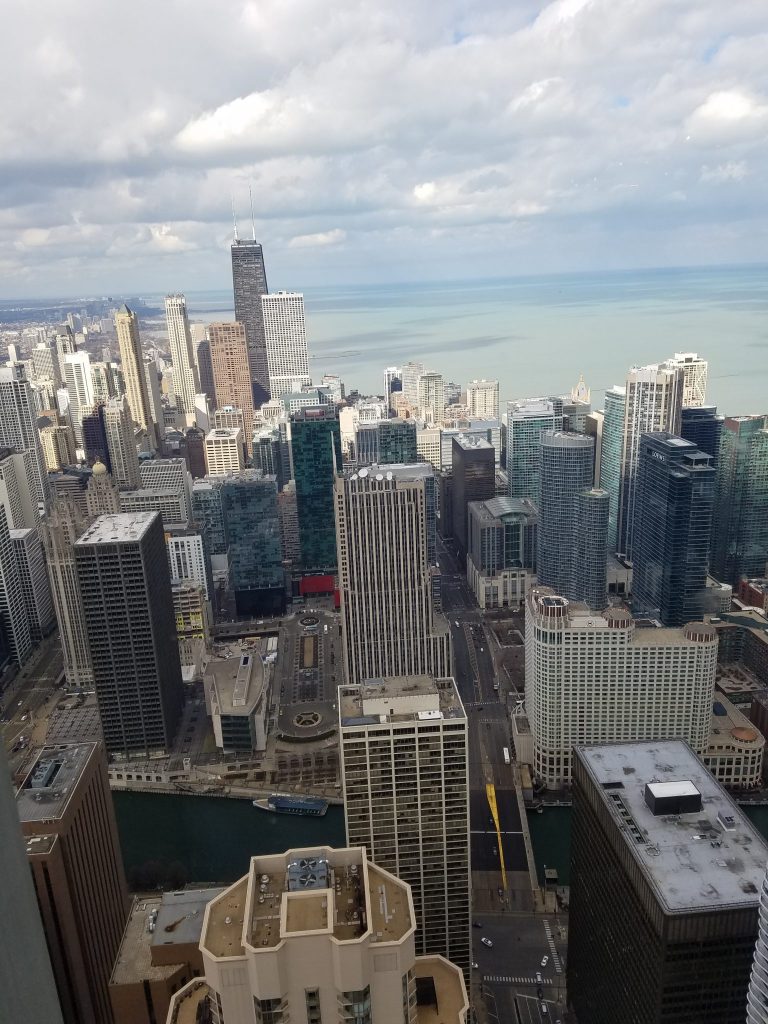 Chicago from the Aon Center 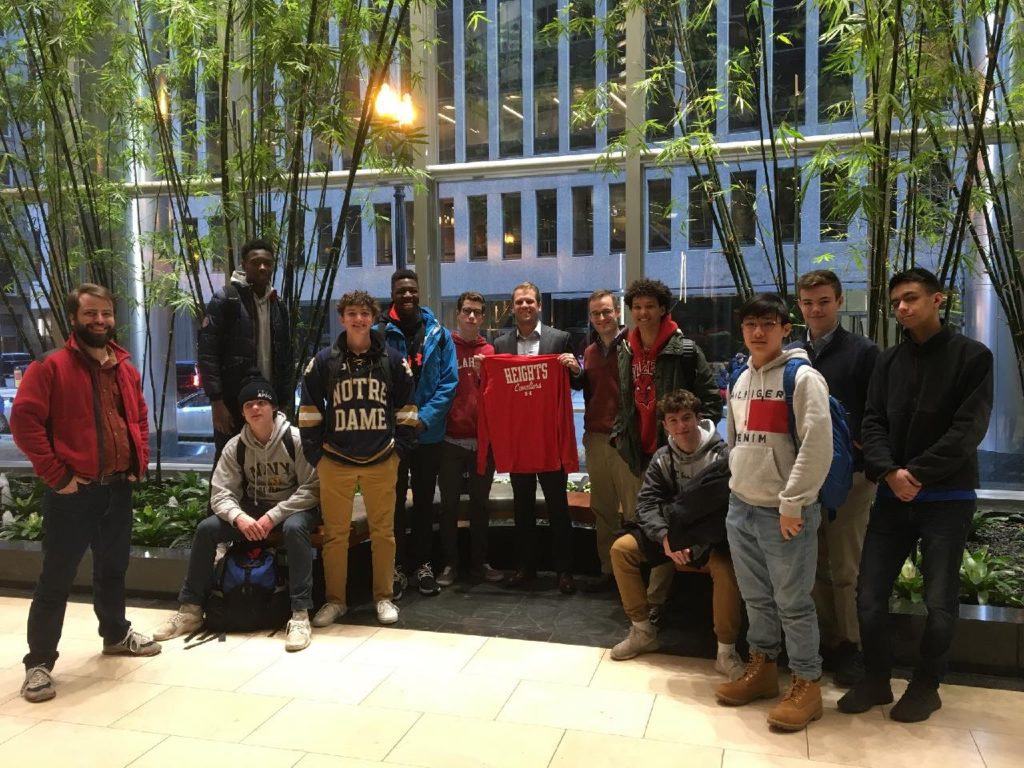 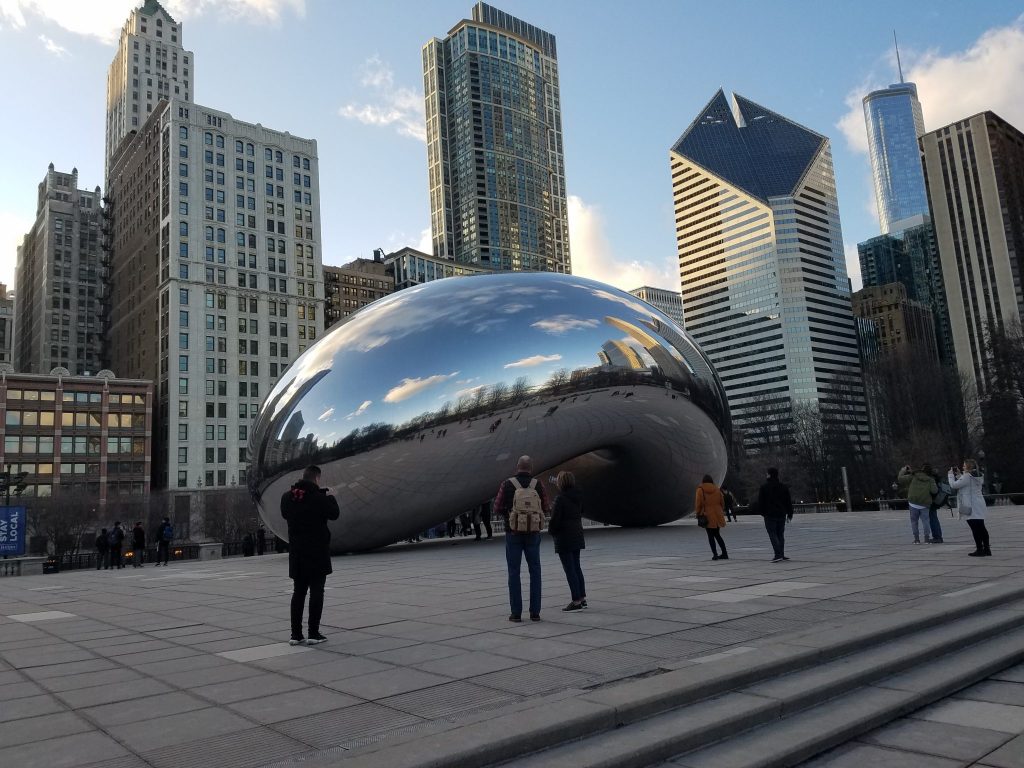 The Bean in Millennium Park 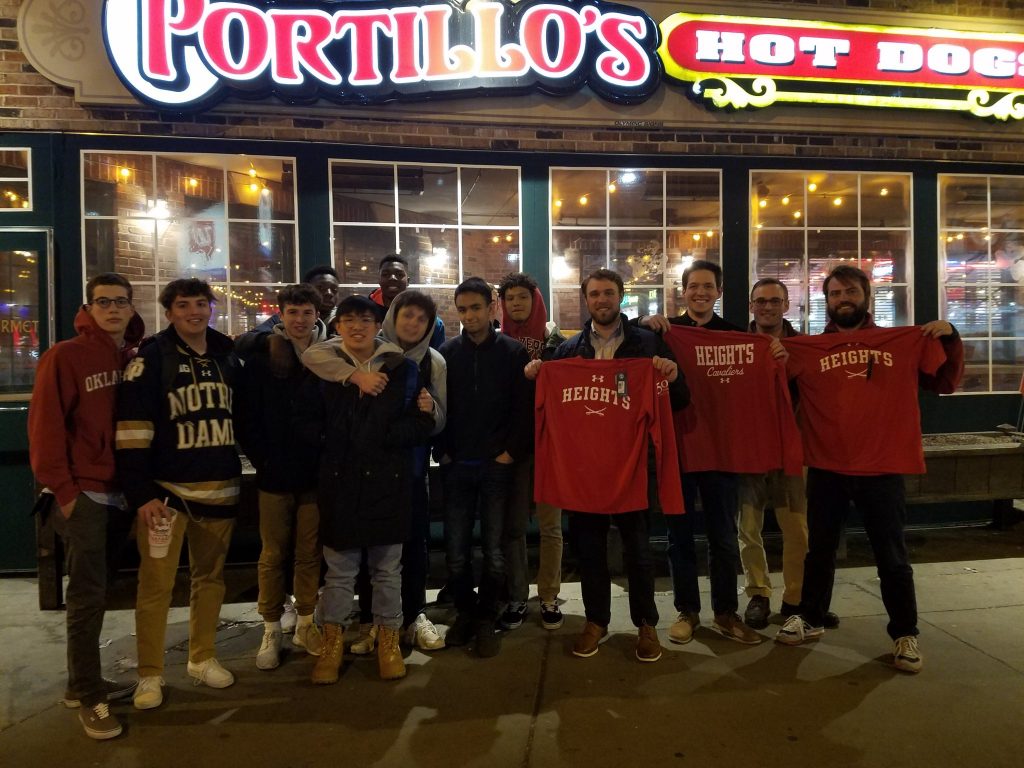 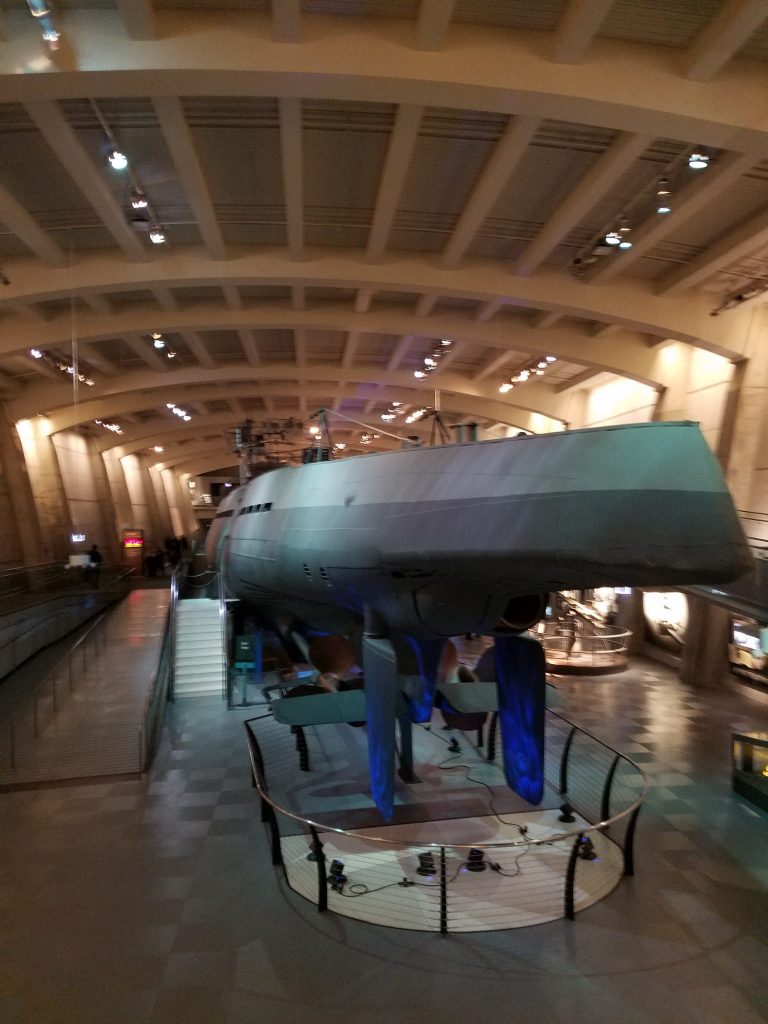 U505 at the Science and Industry Museum 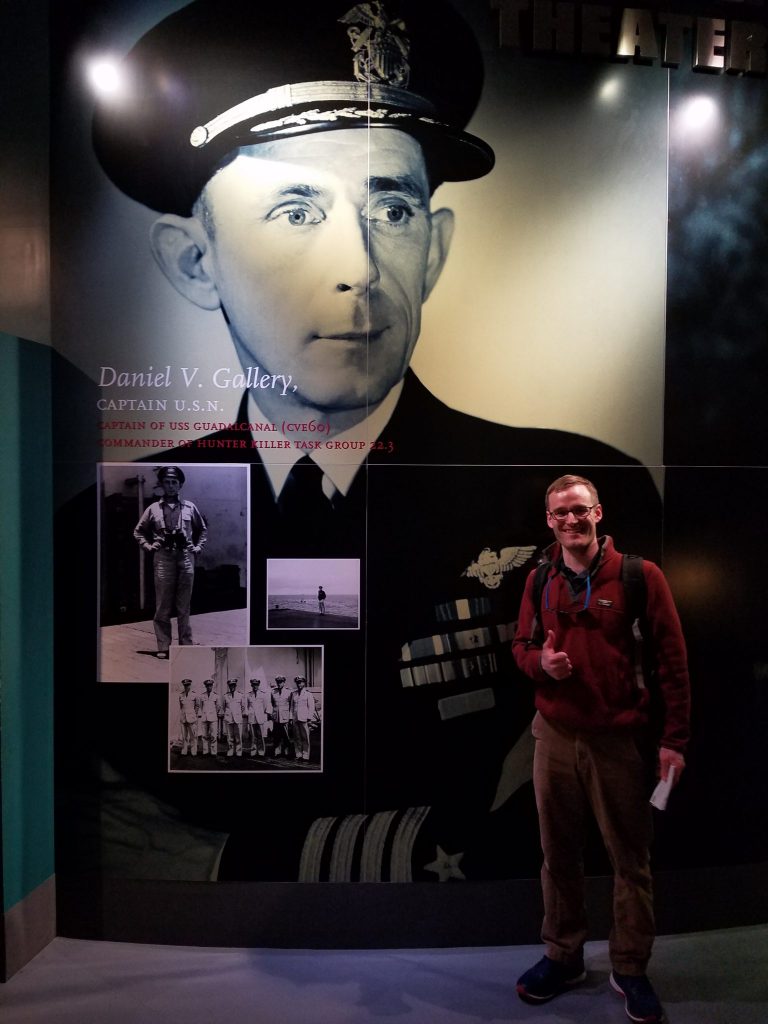 Capt. Daniel Gallery, my great-great uncle and captor of U505 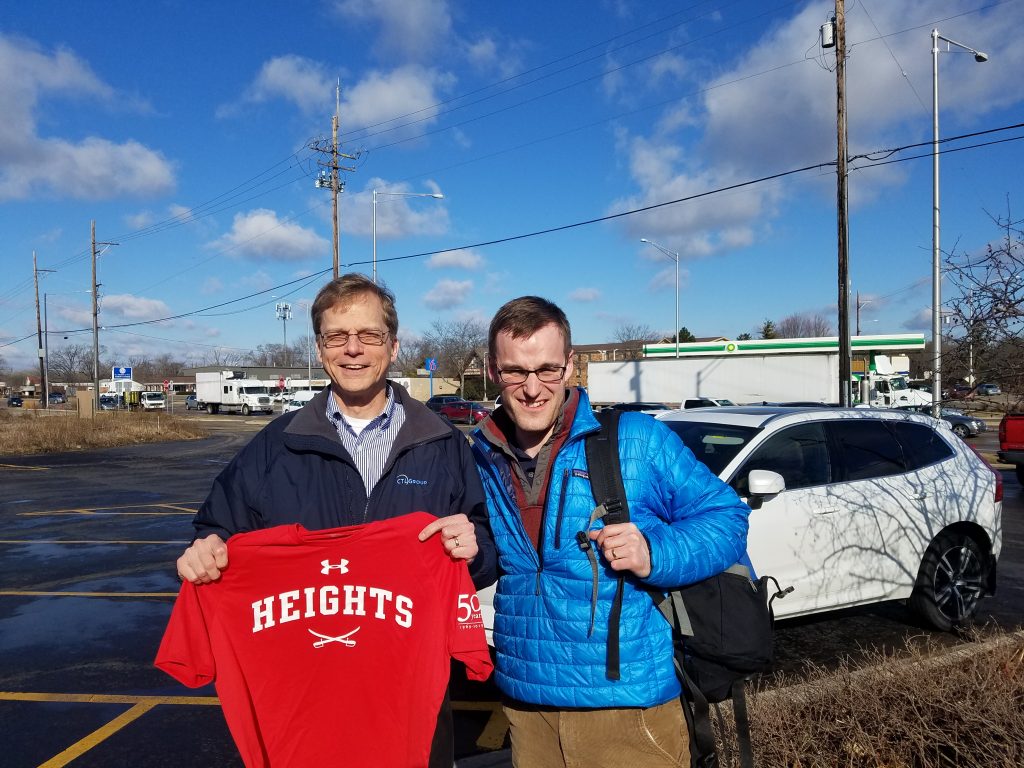 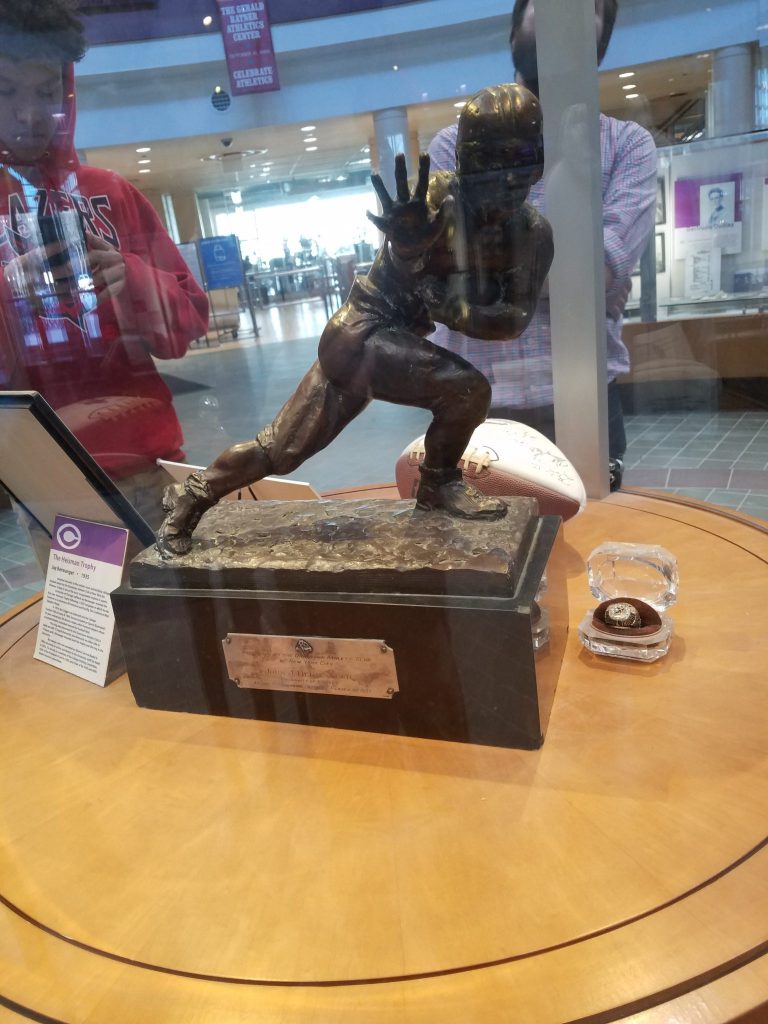 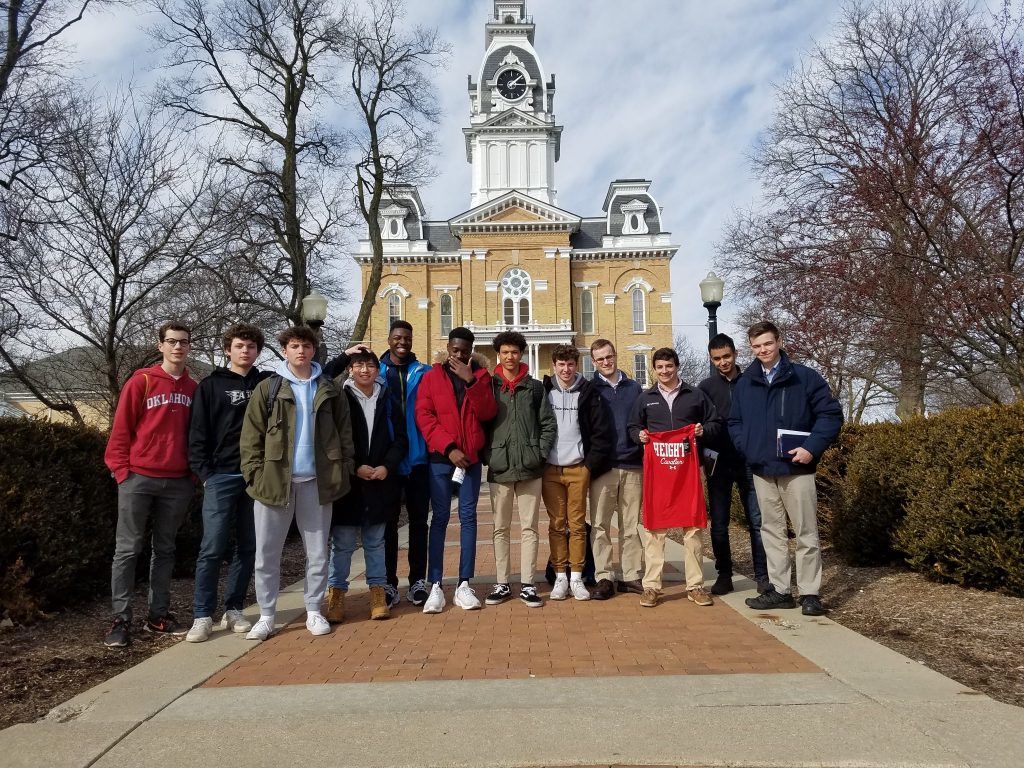 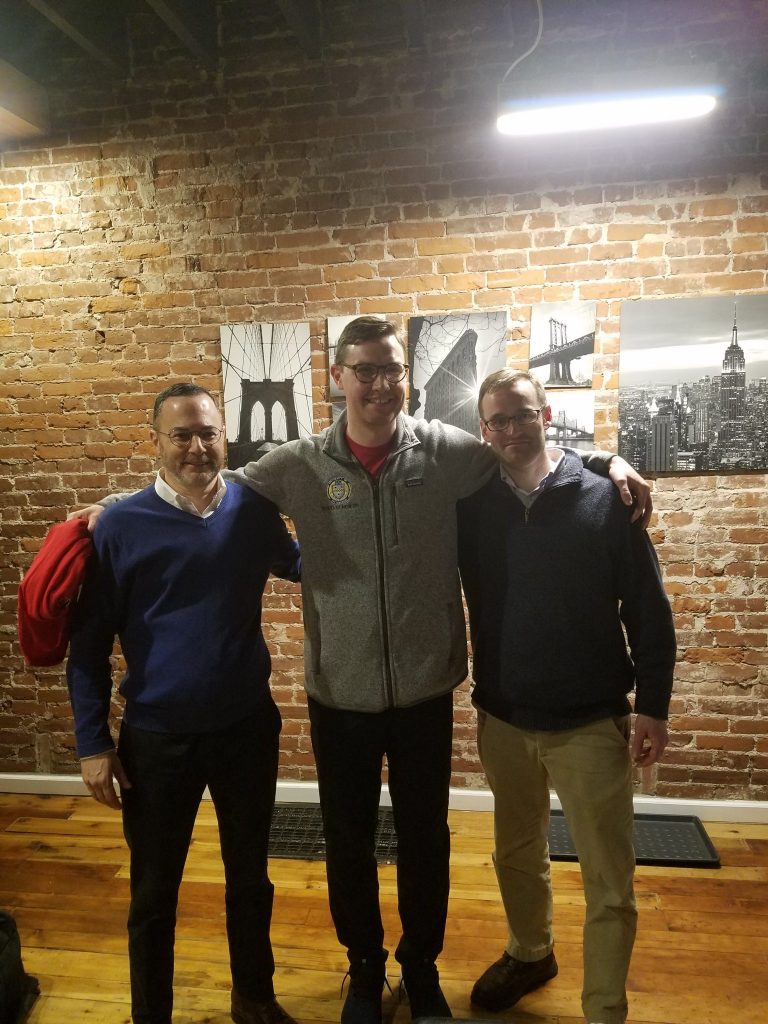 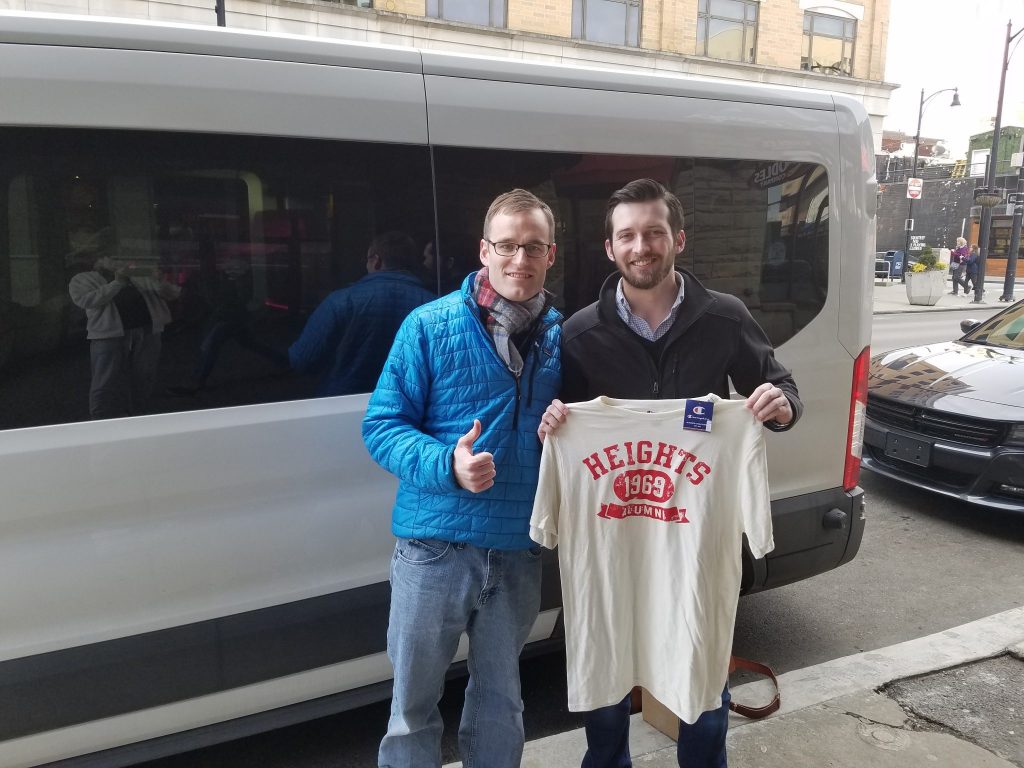 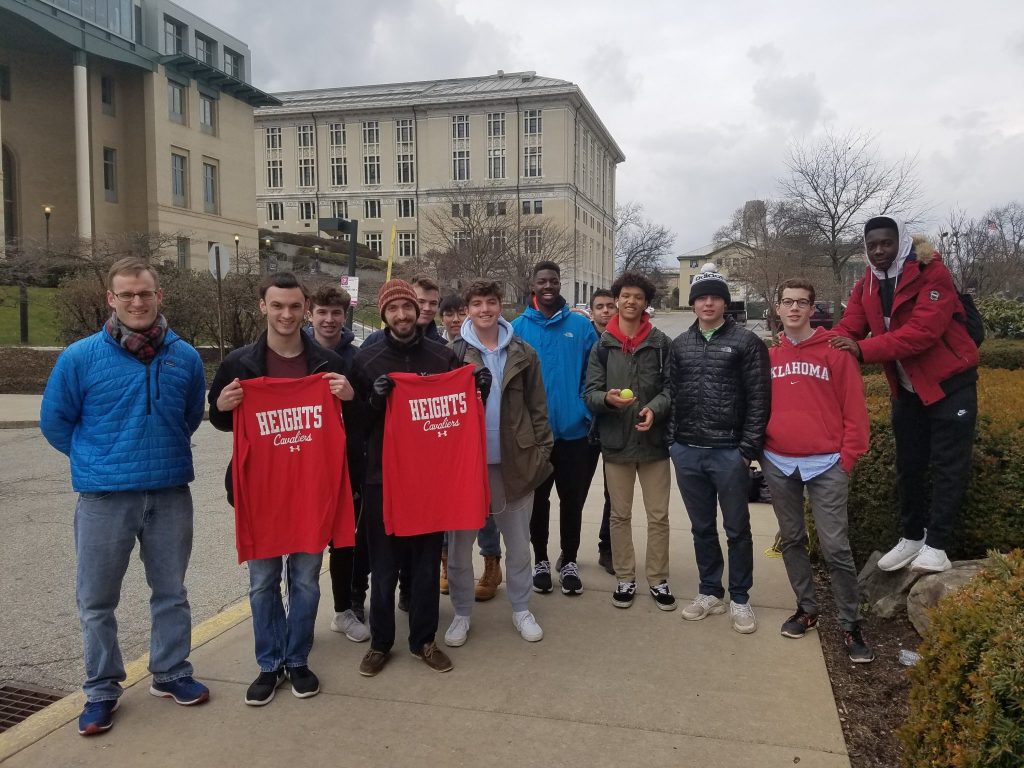